On the last fasting day of 2016 Ramadan, we had to board a flight that takes off even before the iftar time – that would mean – my first onboard on-air iftar! 🙂 We were heading to Dammam, the first stop of our 4-day vacation.
Eid Holidays are nothing but family time and I would have loved to go home and spend the days with my family like every other year. Alas! 4 to 5 days would be very hard and totally unfair considering all the mandated visits to relatives. So to be fair to everyone and be nice to ourselves too, we opted to take off to Bahrain, our neighbour Kingdom where F grew up.
Thanks to Saudi Visa and the King Fahd Causeway, Bahrain is just a drive away from the Eastern Province of KSA!
As the time to leave home neared, I was sceptical about the iftar provision on the flight but F assured me that he has booked the onboard meal; Chicken and Cream Cheese Ciabatta. Yum! Now we are talking! 😀 Off we drove to the Prince Abdul Mohsin Bin-Abdulaziz Airport, which is a stone’s throw away! We parked our car (the poor thing which was under the scorching heat for the next 4 days) and headed to check-in. Yanbu airport is no fancy place and the only thing everyone does is just sit and wait for the call to board! LOL!
We were welcomed by the crew with a box which seemed to be an iftar goodie for passengers. Like a kid, I was grinning at the look of it and happy that we will have another short meal that we ordered too! 😛 You heard it right! The Flynas provided the iftar meal box for every Muslim passenger and we also had our chicken ciabatta coming. This flight also introduced me to Biscoff biscuits! Sheesh, I have been talking only about the food! 😀
Two-hour flight to Dammam and with a little paperwork, we were on the road in a rental car towards Bahrain! Yay! It was the longest hour to get through the security checks and other toll booths, etc. The universal truth, is ladies are best navigators, isn't it? I had to direct him to Downtown Rotana through the app which is the best and my favourite navigator app!
Rotana was exactly as promised on their website except for their food, which I chose to forgive as they were new to the city. By the time we got to sleep, it was way past midnight and just a couple of hours more for dawn to break and it was Eid!

The room had the Qibla direction indicated with a tiny sticker on the ceiling corner which was towards the window. After our Eid prayers which we chose to do in the room itself, we headed to have breakfast. We had no fixed itinerary but I had researched and listed a few landmarks that I wanted to cover during the coming days. More than the landmarks, I was more inclined to have good food from well-known South Indian food chains that I have been craving and try some local ones too. 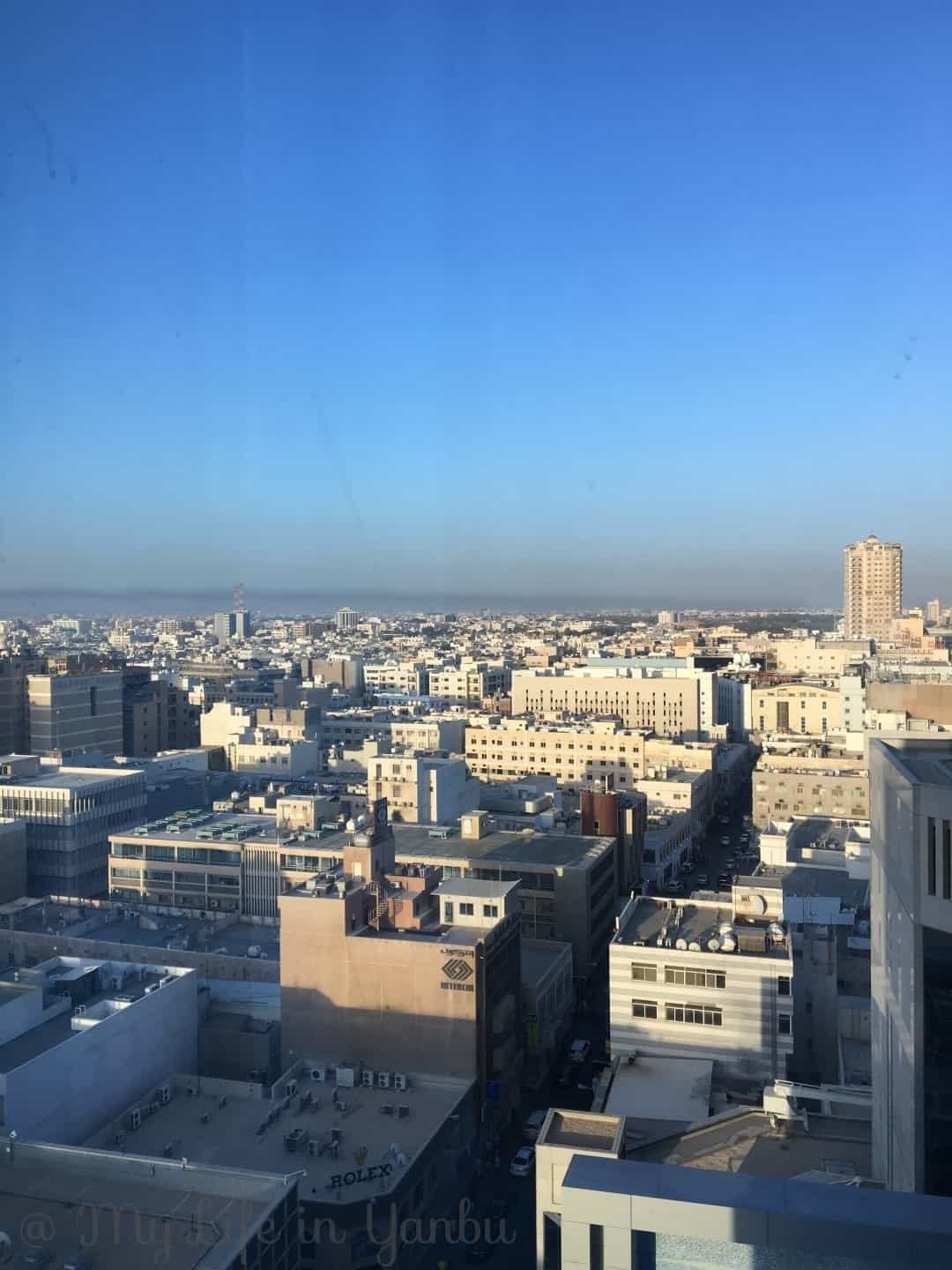 View from the hotel room window 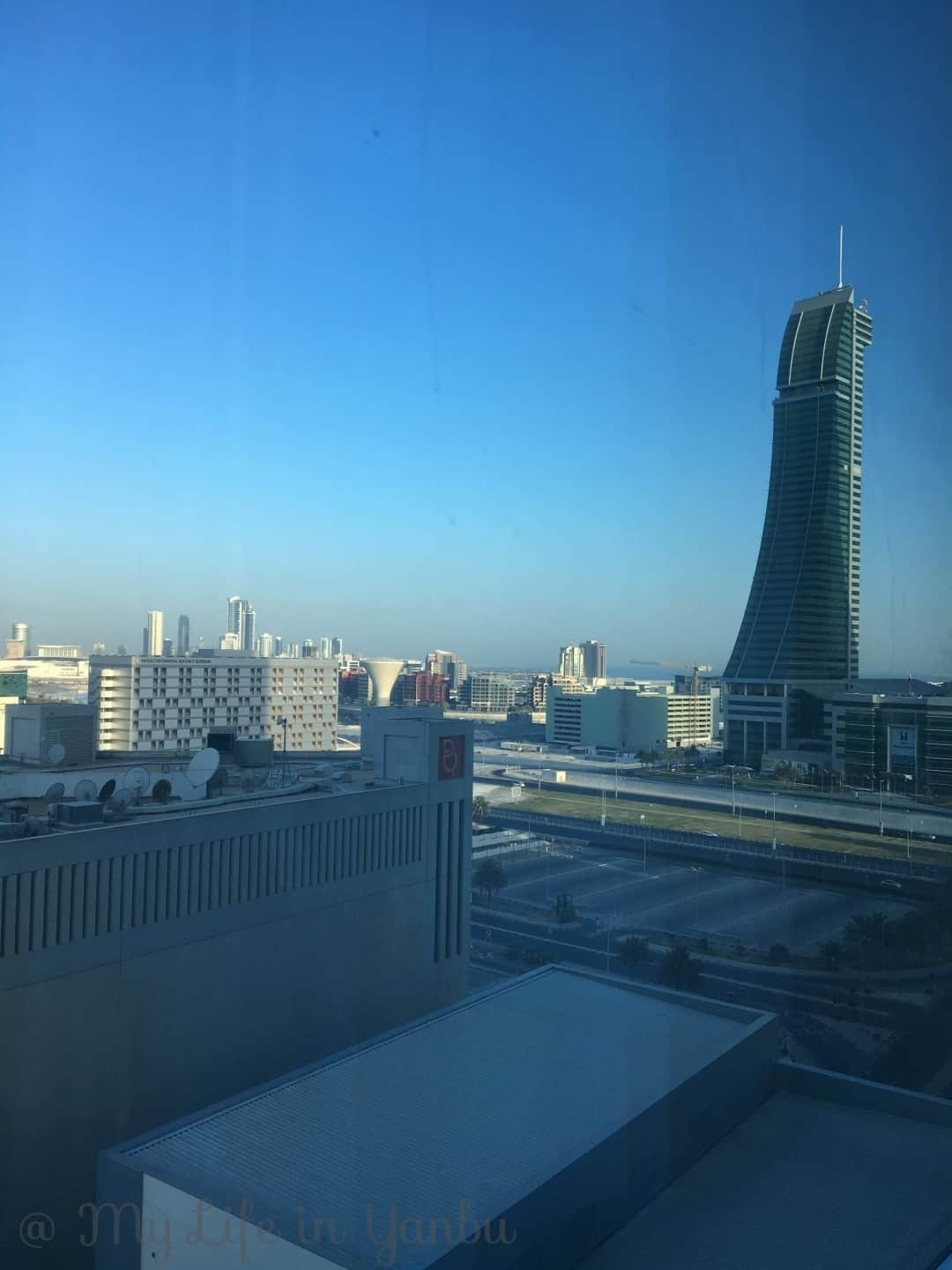 View from the hotel room window
The breakfast buffet at the hotel was not great and that too considering it was Eid day. But who cares, I was looking forward to heading out and exploring Bahrain! 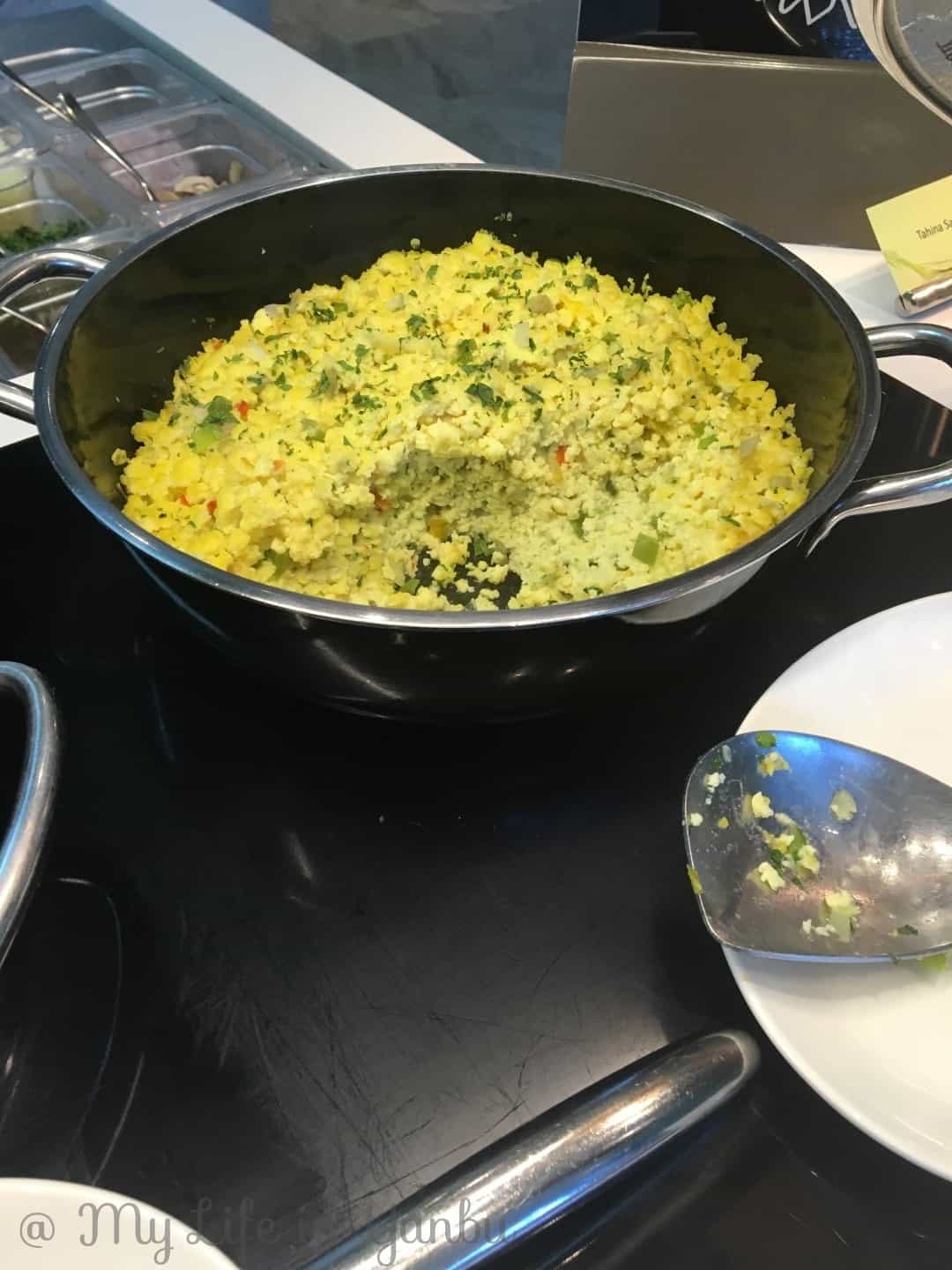 This, my friend, is the Shakshouka! This is how we get even in Yanbu but much tastier! So I still have not seen or had the Shakshouka which the Internet claims to look like! 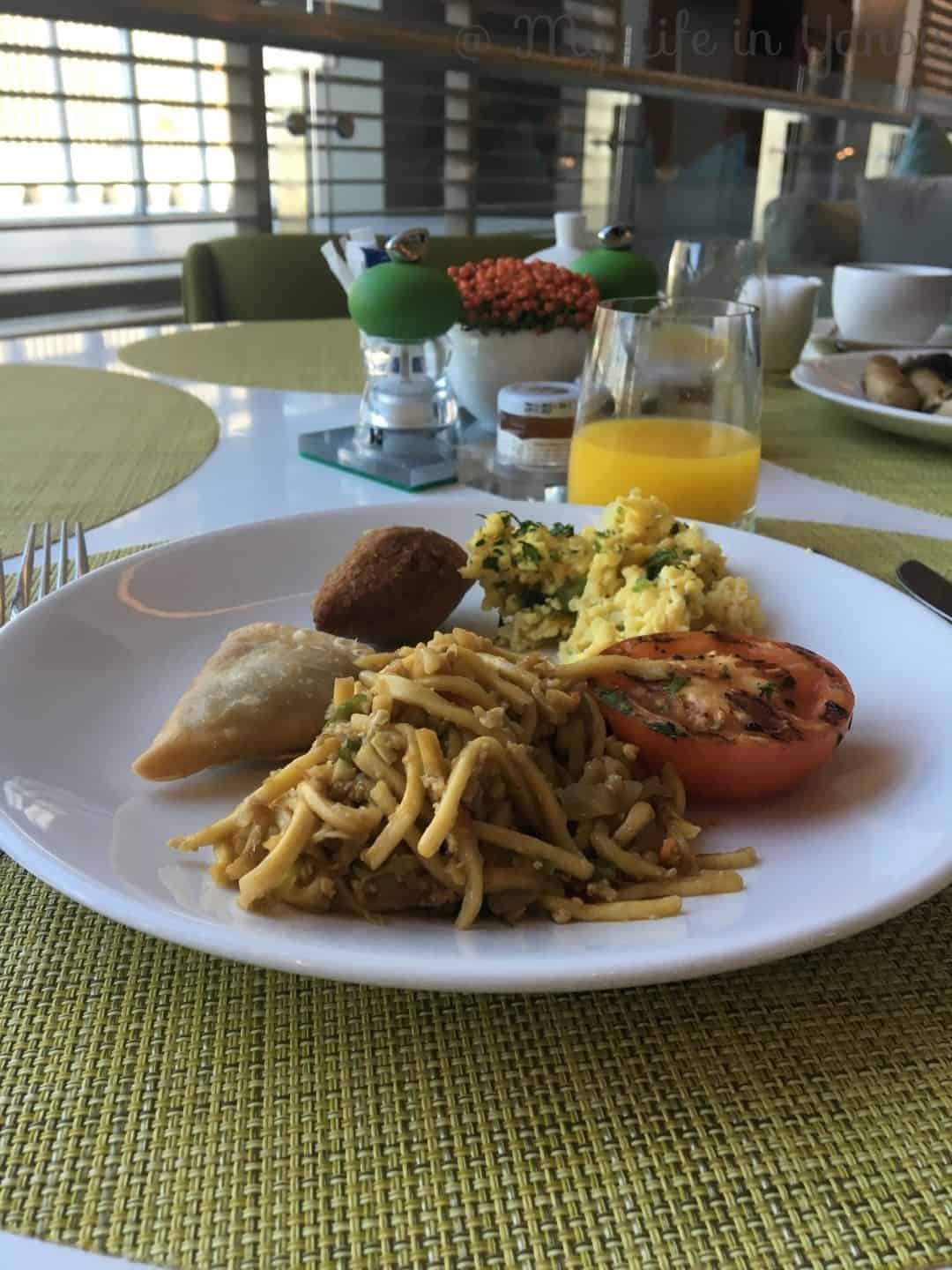 Breakfast buffet at Downtown Rotana
F has a few relatives living here and I was hoping to meet them but him being the Hermit kind, no one was informed about our visit. After a lousy breakfast that just fuelled us from the long period of starvation, we took off to drive around the city.

We knew nothing will be opened today as its a Public holiday, yet we drove around. We stopped at Arad Fort…which was closed, either for some renovation like seen or most likely because it was a public holiday. 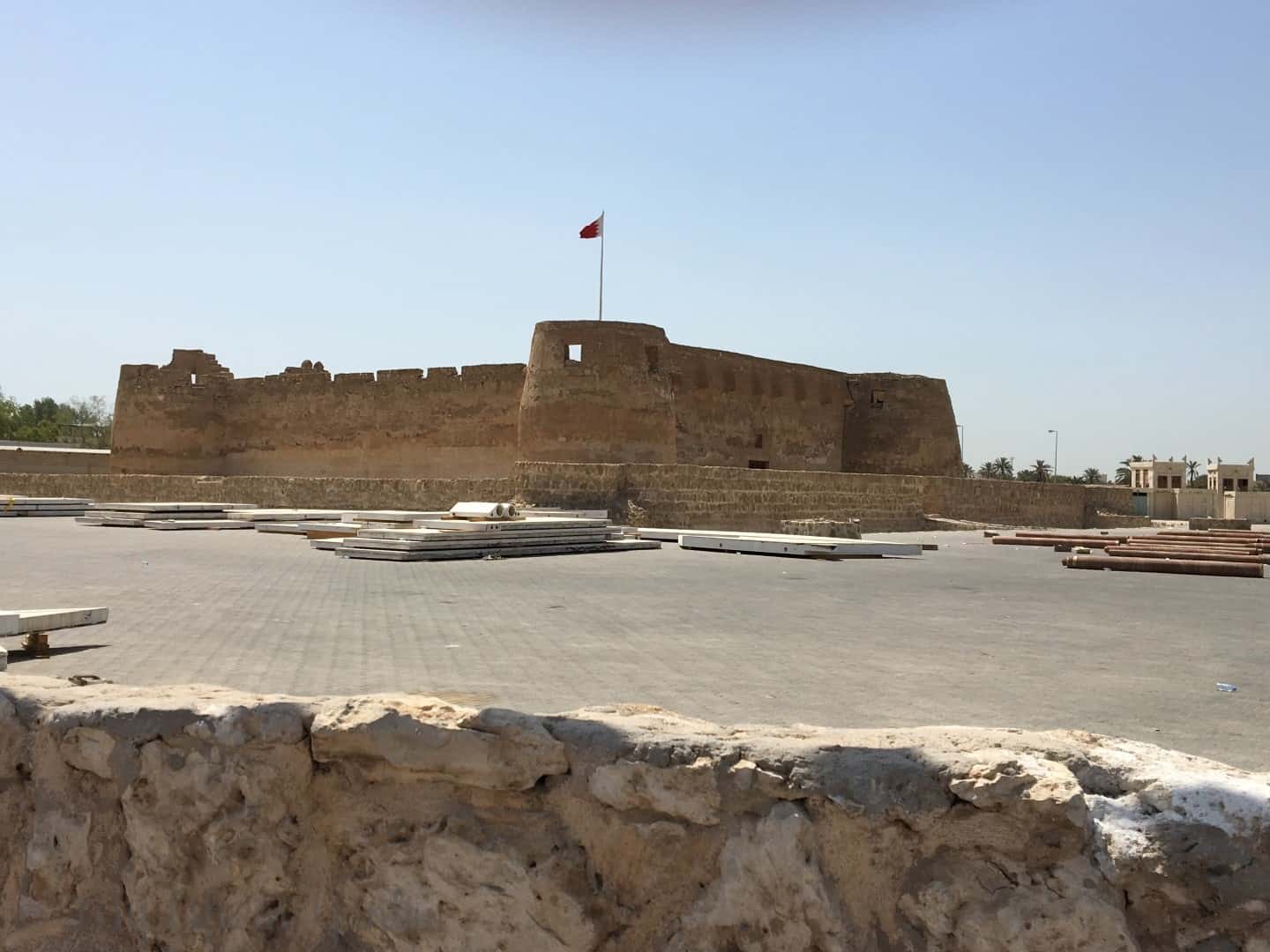 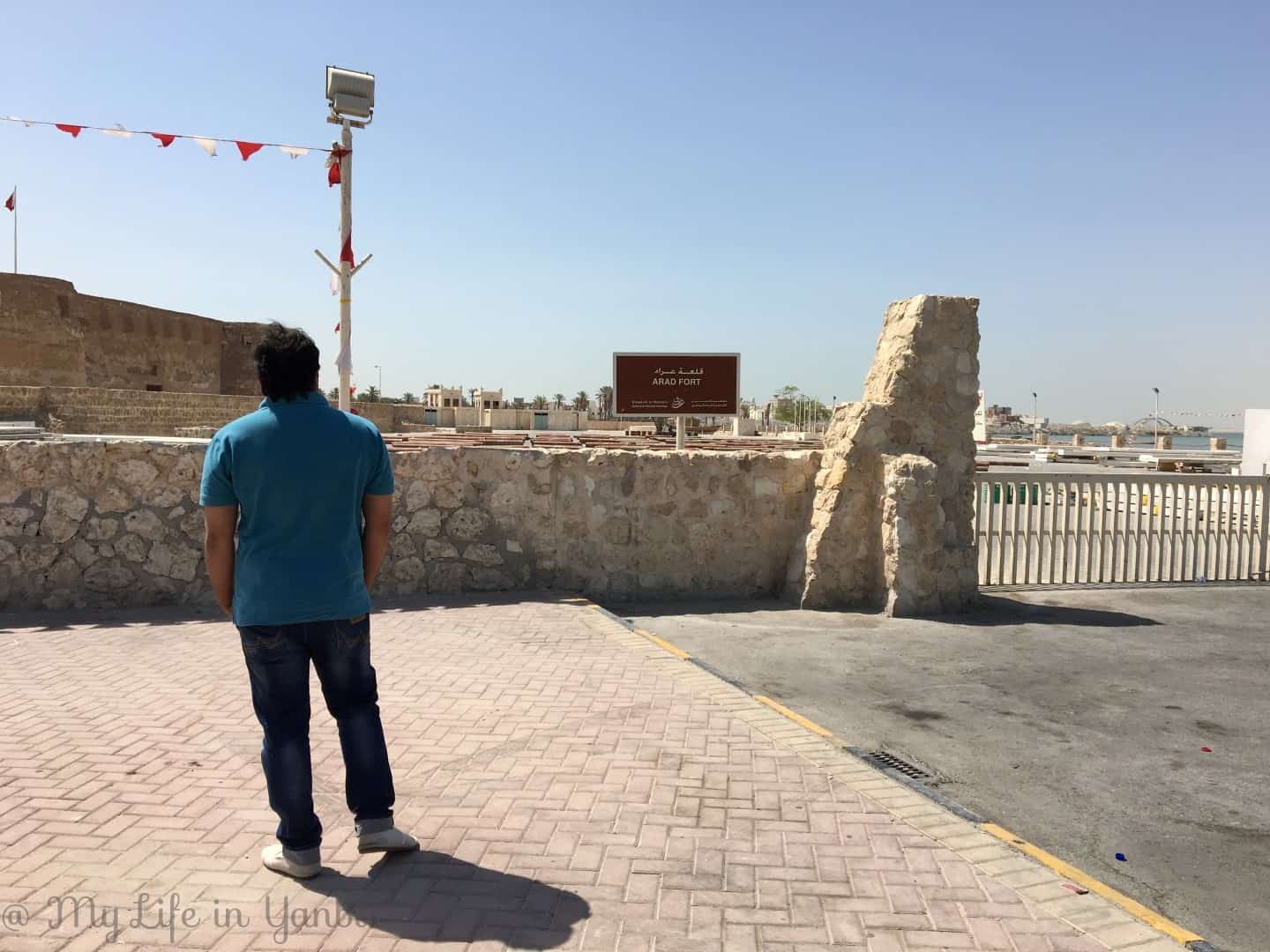 Drove around F’s school and it got me down the nostalgic road of my school days! I love my school days more than my college days. What about you guys?

This country is a tiny dot compared to Saudi Arabia so don't think there isn't much to it! It is generally believed that Bahrain is a "weekend haven" for the people of Saudi. 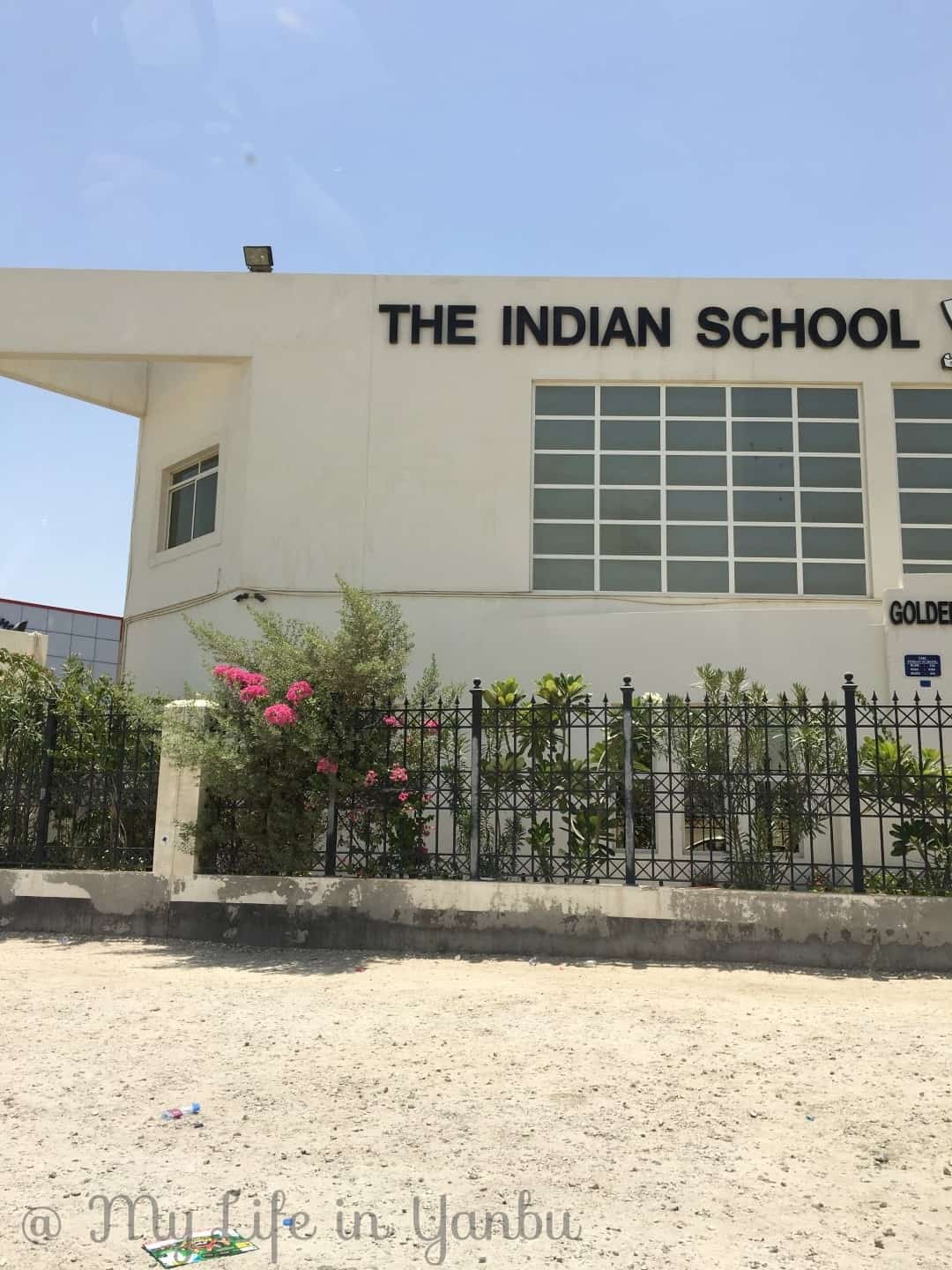 This also happens to be the Dates harvesting season! All around the country, (how many can say we travelled the length and breadth of the country?:-P) there were date palms with a luscious bunch of ripe dates! It may be something very common for the gulf people but it was the first time I am sighting such beauty and F was giving me a bewildered look. 😀

Next, we were heading to the popular Tree of Life which was a disappointment as I expected something extraordinary owing to its hype. In reality, it didn't strike me as something to name as the tree of "Life"! Anyways, one more tourist landmark for Bahrain! The drive to locate this tree was more fun than the destination. It was peak noon and you can imagine the heat, so we hardly spent any time here. 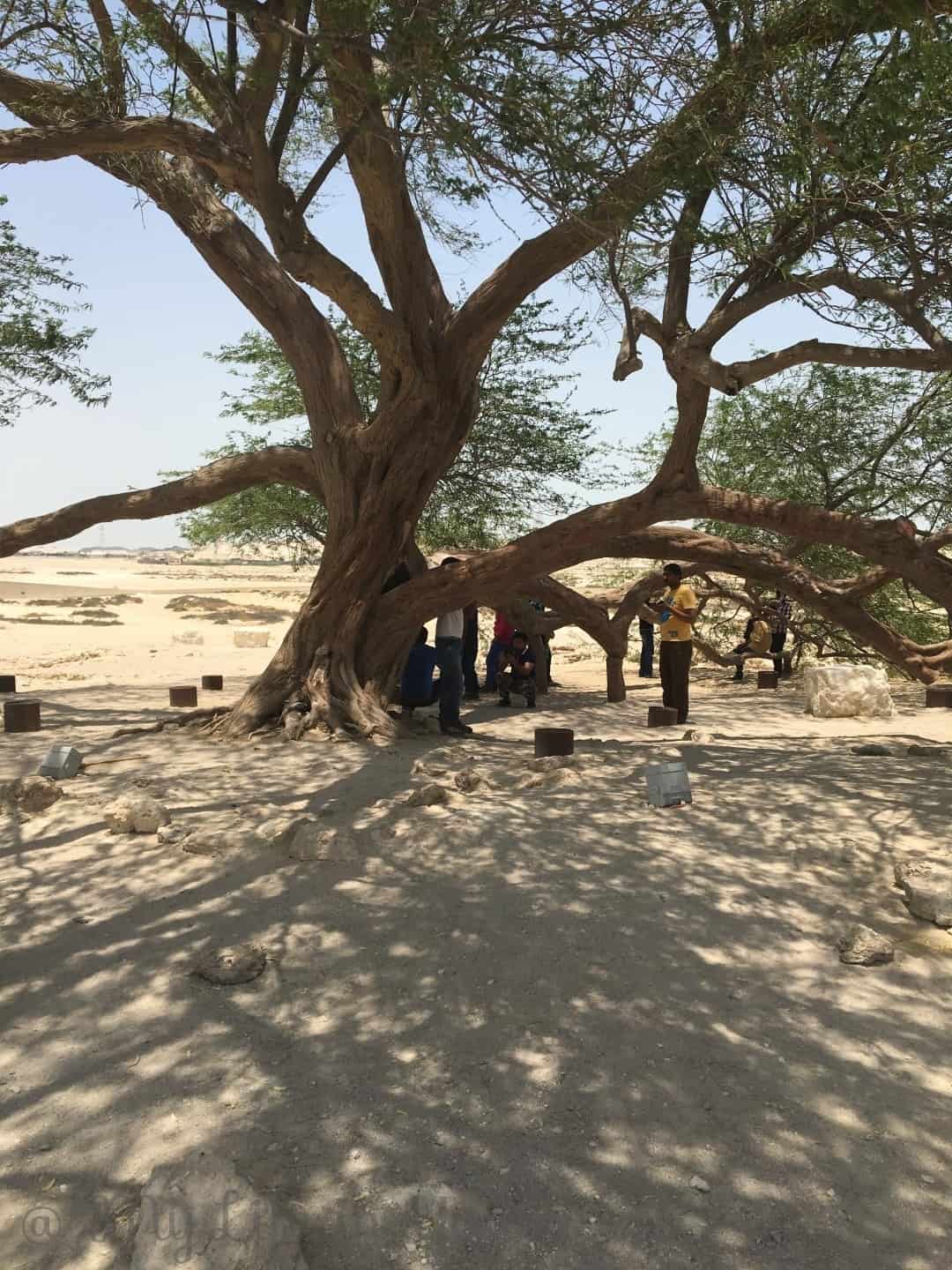 It was so annoying that the guard whose job is not just to guard the tree but I believe should manage the visitors too. A few boys were there constantly not budging, taking numerous selfies and so we just moved on. It was not worth our time. 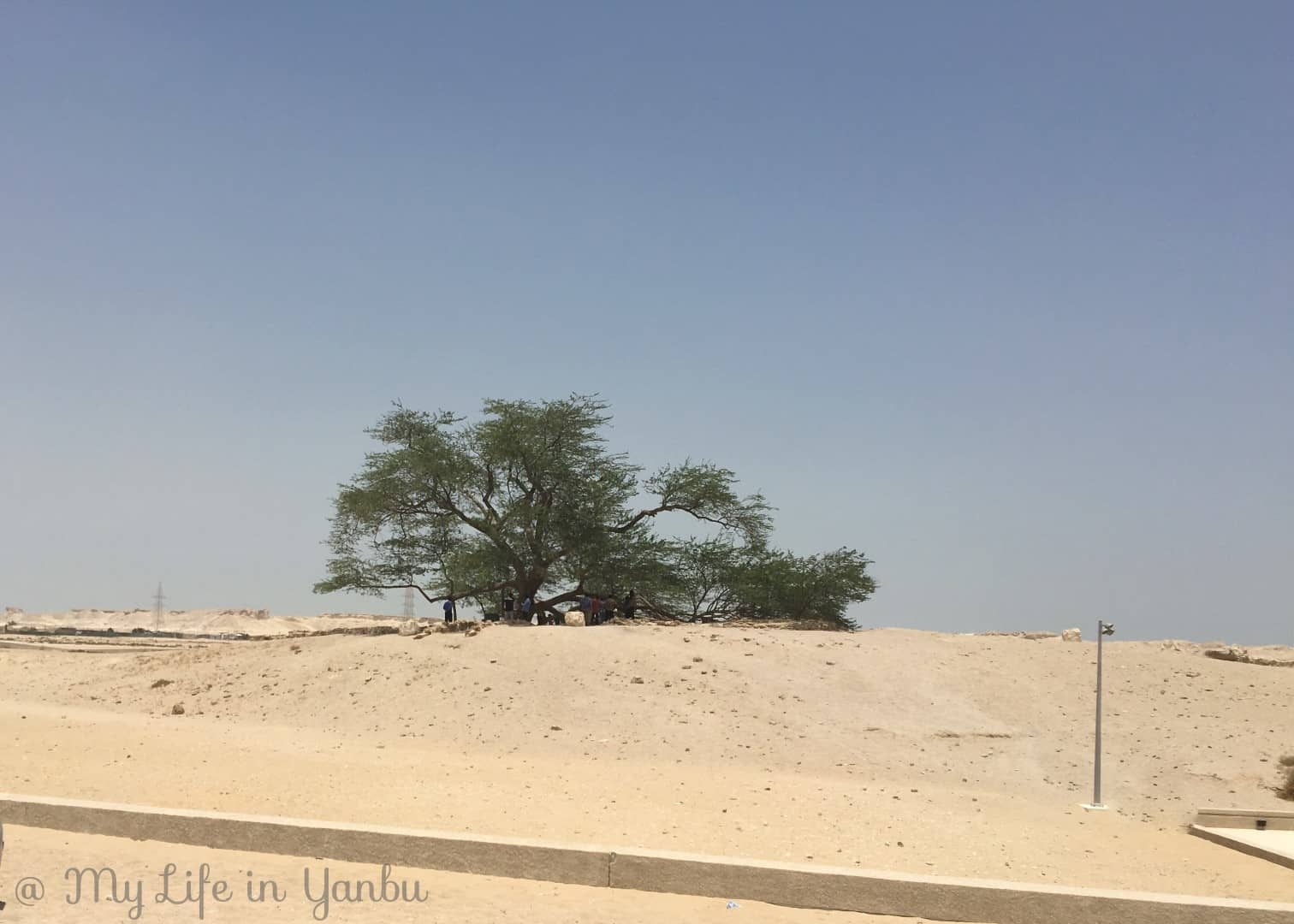 Eid day lunch is the best with family and friends, don't you agree? Before marriage, I always had a couple of my school friends come home for lunch…. (drifting off to those memories… ) well let's just talk about Bahrain right? So Eid Lunch, just two of us, and guess what, I didn’t want to have biryani. I wanted to have a Sadya, a meal served on a banana leaf and I wanted to have FISH! Two things I have been missing living in Yanbu, one being not available the other I don’t cook as F is clearly a No-Fish zone.

We got back to the room, freshened and then headed to Nattinpuram. It was fully occupied and a lot more were waiting. Luckily as we were just two we got a perfect table for two beside the pond-like thingy which was actually nice. Minus the commotion and the constant talking, the food was good. I don’t know if it is the life in Yanbu, I have become intolerant to excessive noise and too much talking! 🙁 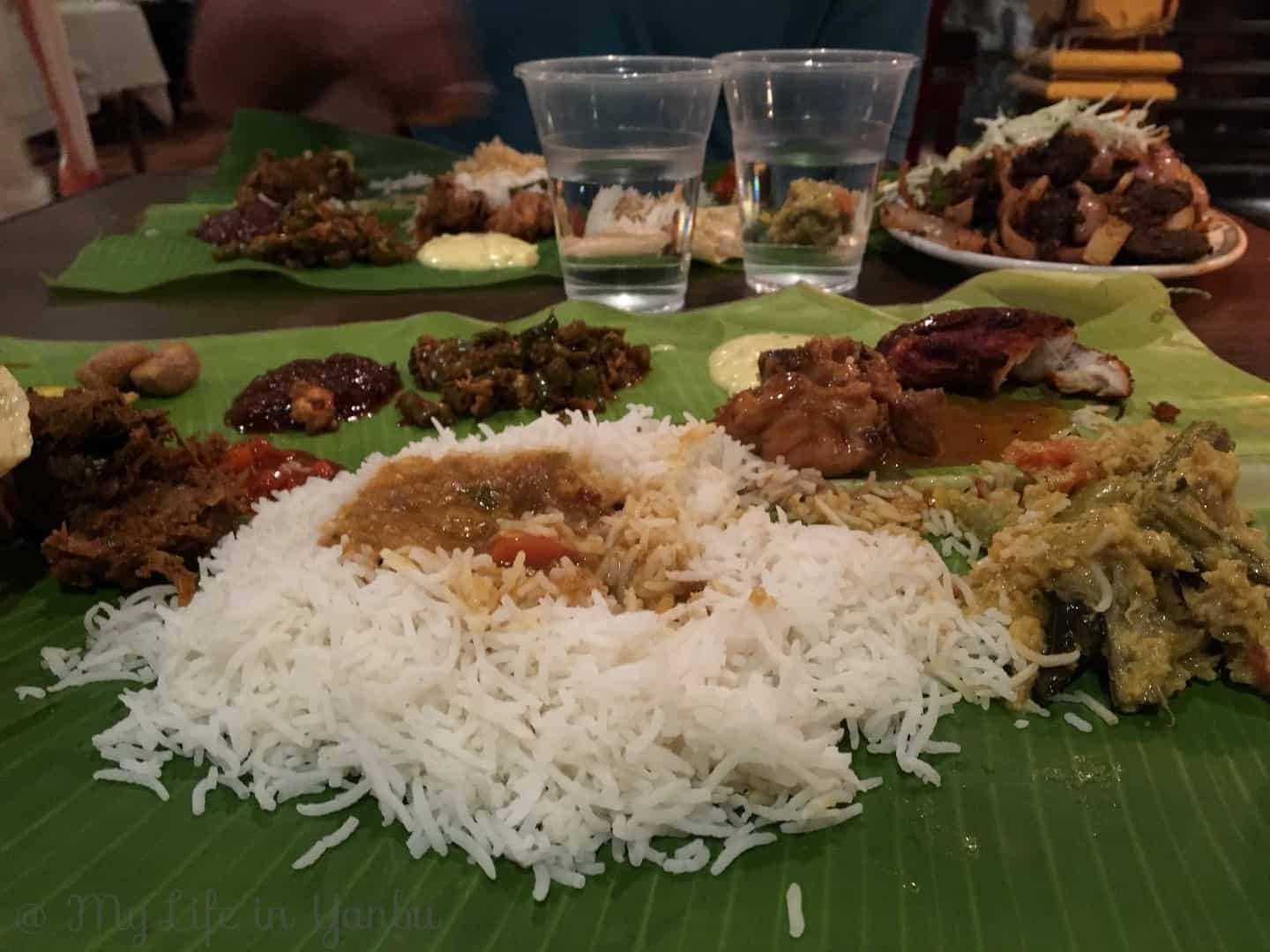 The staff and the customers were all TALKING loud and then there were televisions in every corner playing Bollywood songs - it was all so tacky and I was trying to bring back my concentration to actually tasting the food and didn’t want to stay longer. The food was good until I waited for the dessert hoping it would be payasam but they astonished me by serving lousy Gulab jamoon. Who serves gulab jamuns for Kerala Sadya?

Downtown Rotana was in an ideal location with most of the restaurants and shopping places just a walk away. After a long siesta, later in the night, we went for a long walk to Bab al Bahrain. This is just a few minutes from the hotel. Bab Al Bahrain is a historical building that marks the entrance to its Souq or market. History says that this entrance once stood close to the coast, but due to the recent land reclamation (making land in the sea) the monument is now amidst the city. The pathway of the souq was lit up with Eid decorative lighting and I didn't feel comfortable standing and clicking pictures in the crowd. It was beautiful.

Most of the shops were closed and a few others were closing so we just strolled without any aim looking for anything in particular. I was looking for some henna cones. We walked so much that I became tired and so began to walk back to the hotel. On the way back, we saw a café that served tea! We had a tall cup of tea and some pastries, I also got to play with the Cat that seemed to be well known around. It allowed me to cuddle it! Meow!

Back in the hotel, we ordered some light dinner in the room and called it a night. The walk was indeed a workout! Phew… 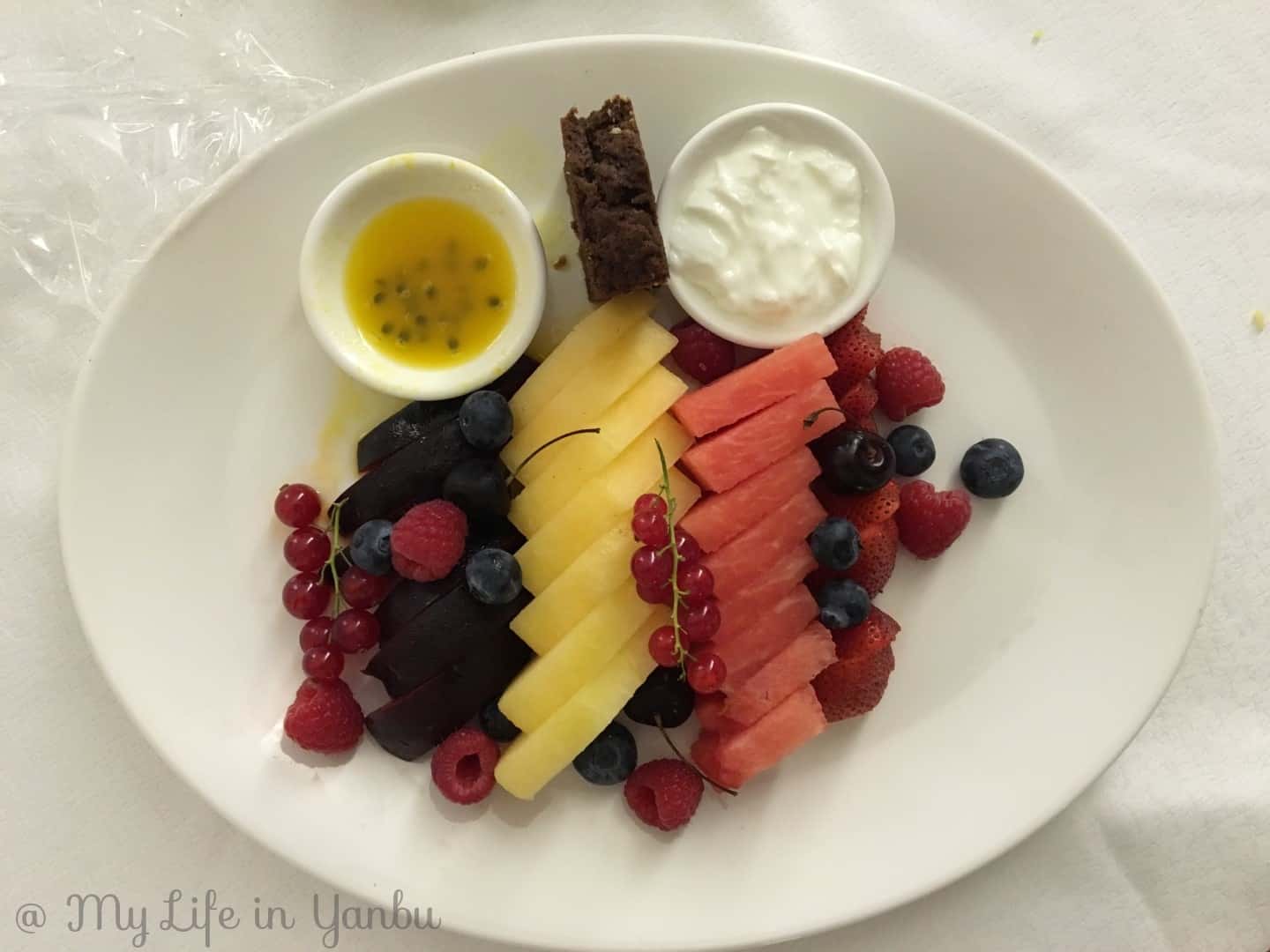 End of Day 1.
All the bold characters are linked to the best resources that will help you know more about that place or landmark.
Day 2 at the National Museum