Chaklama, the Omani macaroons are baked confection made with desiccated coconut and sweetened condensed milk with a whiff of cardamom. Crunchy on the outside and chewy in the middle, these are great paired with some Arabic coffee or my chai!

2020 update: I had made these cookies in 2015 as part of the now-disbanded MENA Cooking Club to celebrate the country, Oman. MENA meant Middle Eastern North African countries. Updated the recipe and images. It is unfortunate that even after 5 years, there is not much content around the authenticity of this recipe.

There is not much information about these Middle Eastern macaroons called Chaklama on the web and the few that are already doing rounds are all born out of one recipe by Nestle-Family. The one major difference I found between Chaklama and western macaroons is the use of eggs. This recipe is as versatile as any coconut macaroon. Though I kept it classic, do feel free to have their chocolate coated, or nuts stuffed etc.

I wonder if Omanis use coconut in savoury dishes as we south-Indians do. Another sweet confection they make with coconut called Qashat al-Narjeel, is very similar to our coconut barfi or Djibouti's Kashata-A-Nazi.

You must have already seen the no-bake coconut ladoos or the two-ingredient ladoos that include just the coconut and condensed milk, right? Well, this is essentially a baked version of those ladoos but with a few more basic ingredients like baking powder, oil or butter just to get the baking started. Unlike the chocolate chip cookies that use a lot of butter, chaklama needs just a knob. I have used coconut oil to keep true to the flavour but you may use butter instead.

With just 5 ingredients and a pinch of salt, you have a sweet coconut snack in your hand.

Lightly grease your hands and make equal-sized balls (I used a tablespoon for scooping the dough and got 12 macaroons) and place them leaving space between each ball.

Bake in the preheated oven for 12 to 15 minutes or until golden brown. You may have to turn the baking tray midway if it browns only one side.

The one glaring issue I kept facing in every small batch I baked was that the cookies do not retain the same crispiness the next day. When you bite into a freshly baked chaklama, there is a nice crunch on the outside, but in a day they go soft. I finally gave up trying to tweak the recipe after reading that it is common with coconut macarons. I guess that is where the egg would have made a difference. maybe? but then probably this is how Omanis made it anyways. This is definitely on my list to eat if I ever visit Oman so I can be sure of the recipe residing on my site. InshaAllah!

But be assured the taste is not compromised, it is just the texture. So, I would suggest making a small batch that you can finish off in a day. But no harm if you have some leftovers - put them back in the oven for crisping - not in a microwave, please! 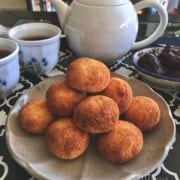