This Prawns Biryani is my first SEAFOOD recipe appearing on the blog because, in F's world, prawns and shrimps are not seafood! (rolling my eyes)
Malabar biryani? or Thalassery biryani?  because honestly, I am not sure why there is a "Malabar" biryani when Thalaserry is part of the Malabar region and it is this city that holds the credit! I researched so much to learn the key differences between these two iconic dishes of North Kerala and trust me, I could not come to a convincing conclusion. While some state that the difference is in rice being roasted or not, using caramelised onions or not, etc - but I believe it has reached a point where it is become near impossible to differentiate the two. However, it is clear that Malabar biryani is mostly tagged as Kozhikodan Biryani - I am calling this Malabar because - I think this is an amalgamation of both biryani of the same geographical region and hence the title "Malabar cuisine Prawns Biryani". 😀 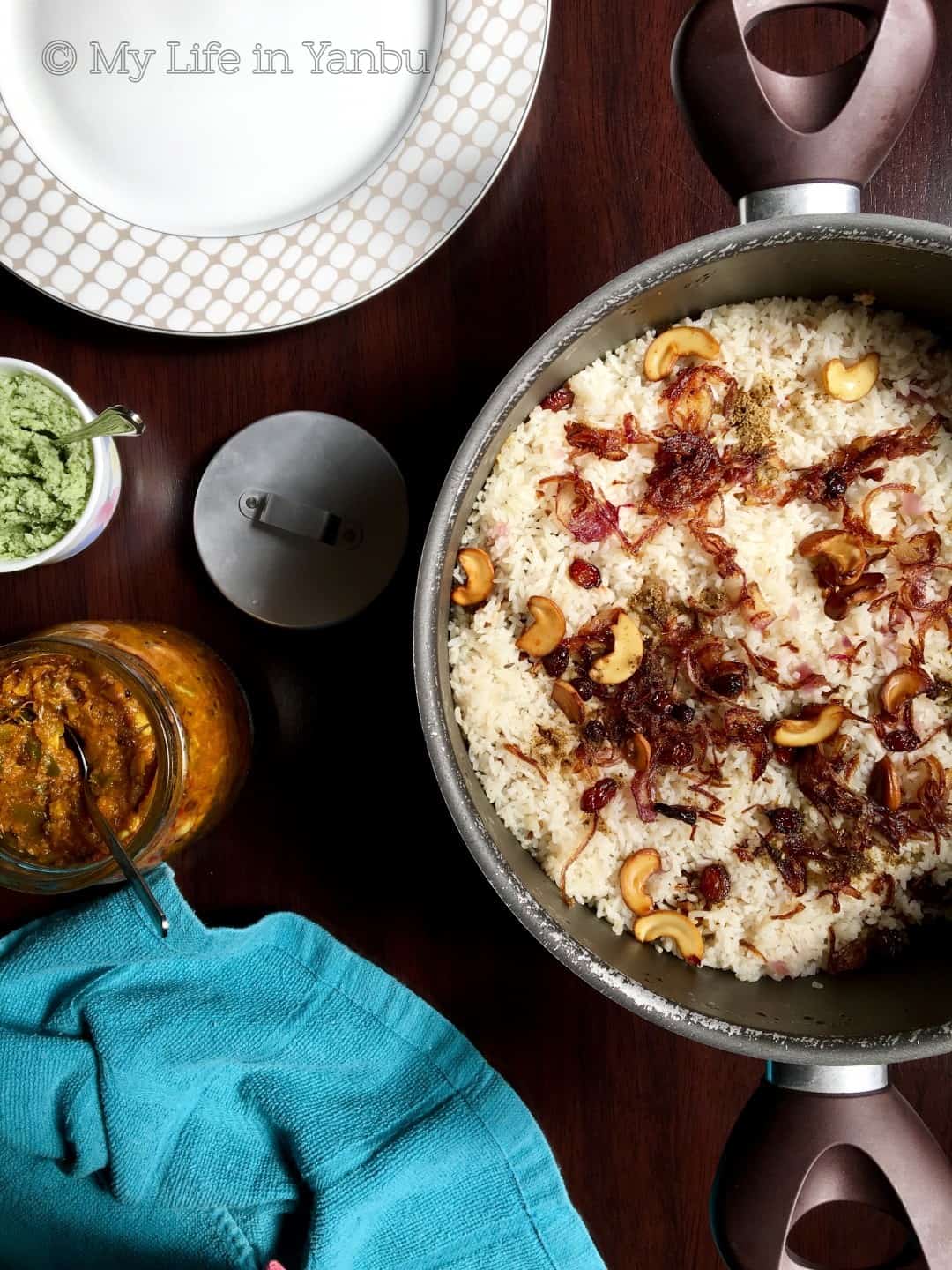 The land I come from celebrates the son-in-law's stay all through his life because he remains the "new groom" for my clan. A status that calls for a feast whenever he comes home. But with F being averse to all seafood (except for prawns, oh that isn't one right?) my mom has very limited options as we (they) are seafood people. With a heavy heart, she sticks to preparing all kinds of prawn dishes while she still prepared other fish items for the rest of us. Of course, there would be other meat and poultry but serving seafood for the groom is what pleases the host. So the first two years of our marriage, F was served prawns almost every single time he visited my home, so much that he completely stopped eating Prawns. 😀 Worked better for me!

I personally can live without seafood but I do take full advantage when I am at my home and there are zillion specifications on how I want mine. 🙂 While the whole clan was disappointed that their new groom would not have fish, I couldn't be happier knowing I will never have to cut, clean or put up with the stench of fresh fish 🙂 Sorry, not sorry! However, these days, it is a different story as we serve raw fish for Ragee and F never goes near her. 😀

As a new stay-at-home wife in Yanbu back in 2014, I resolved to make his favourite Prawns and we bought some fresh prawns. I took two days to deal with the deshelling and deveining etc. That was the first and last time I did anything of that sort and knew it is not my cup of tea! (I feared some of it might come back to life! :-D) 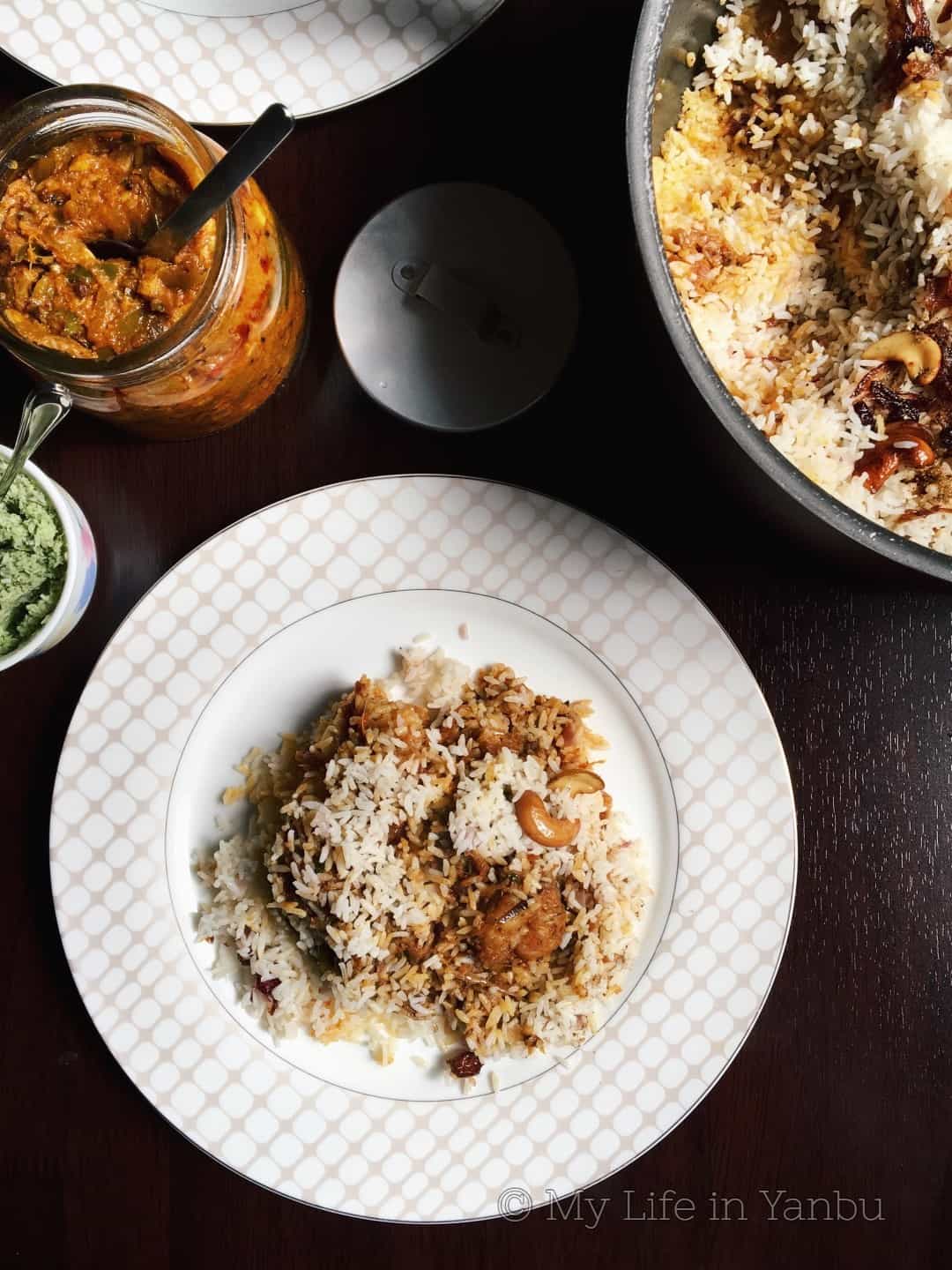 After I prepared this Thalassery Chicken Biryani, we went to pick up food for Ragee in the frozen section where I saw some jumbo prawns pack. I immediately asked F if he would want to have them and he nodded OK. This is my first time with frozen seafood and I am sure it is a breeze - as it's all cleaned and ready to cook! 😀 I prepared this Malabar prawns biryani the very next week and I am one happy wife to see him rejoice and relish! Alhamdulillah, I was able to rekindle his love for Prawns. Me happy. My mom will also be happy.

The recipe is very akin to Thalaserry Chicken Biryani except for a few ingredients. The process remains the same. First, prepare the masala, then the ghee rice, layer them in a pot and dum cook. Look at me - talking like a pro! LOL 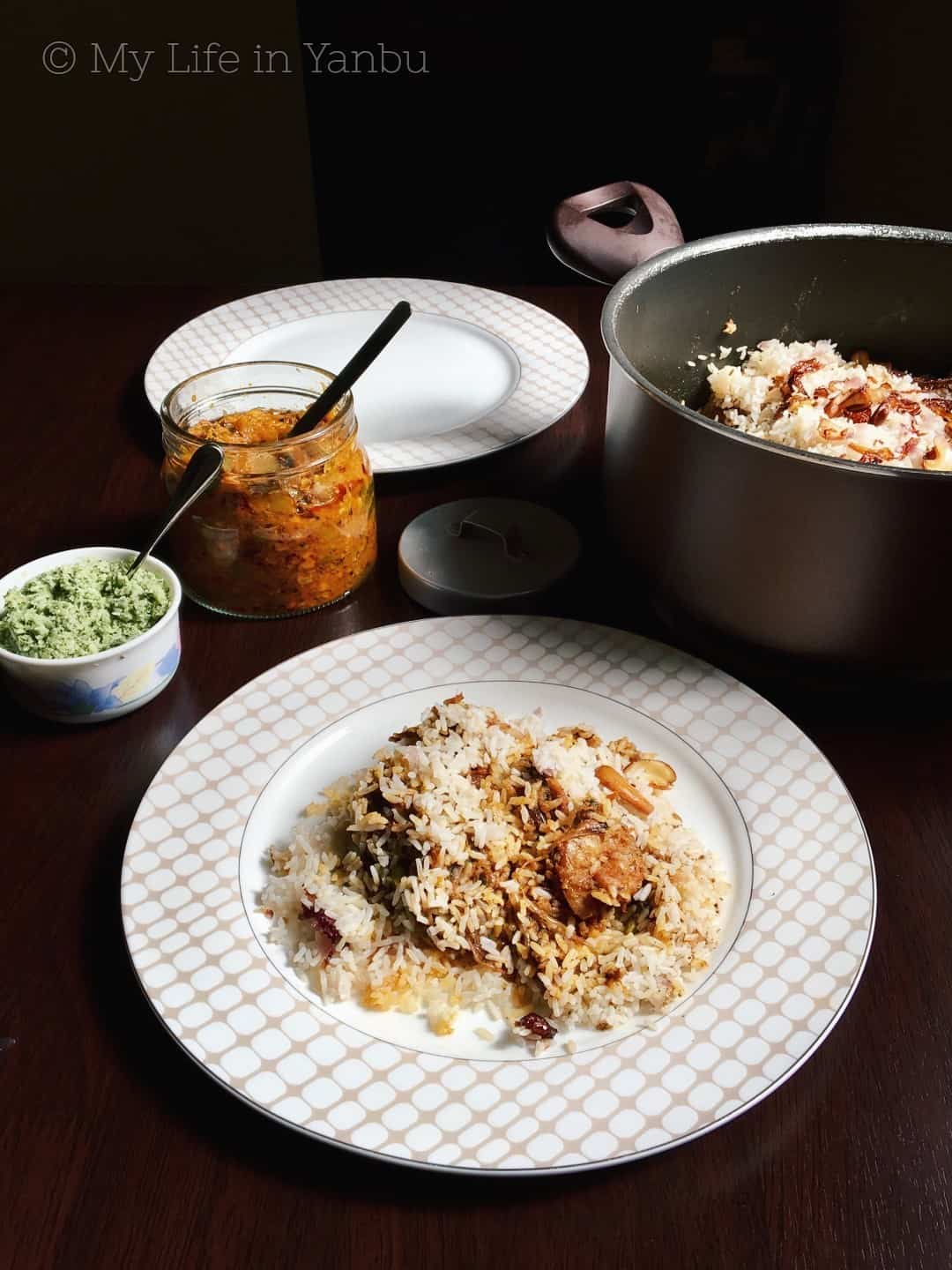 NOTE: Prepare the ghee rice as per your own tried and tested method of making rice. If you notice, I have used less water to cook the rice. This is because the masala is already moisture-rich which will help the rice to cook completely during the dum cooking. 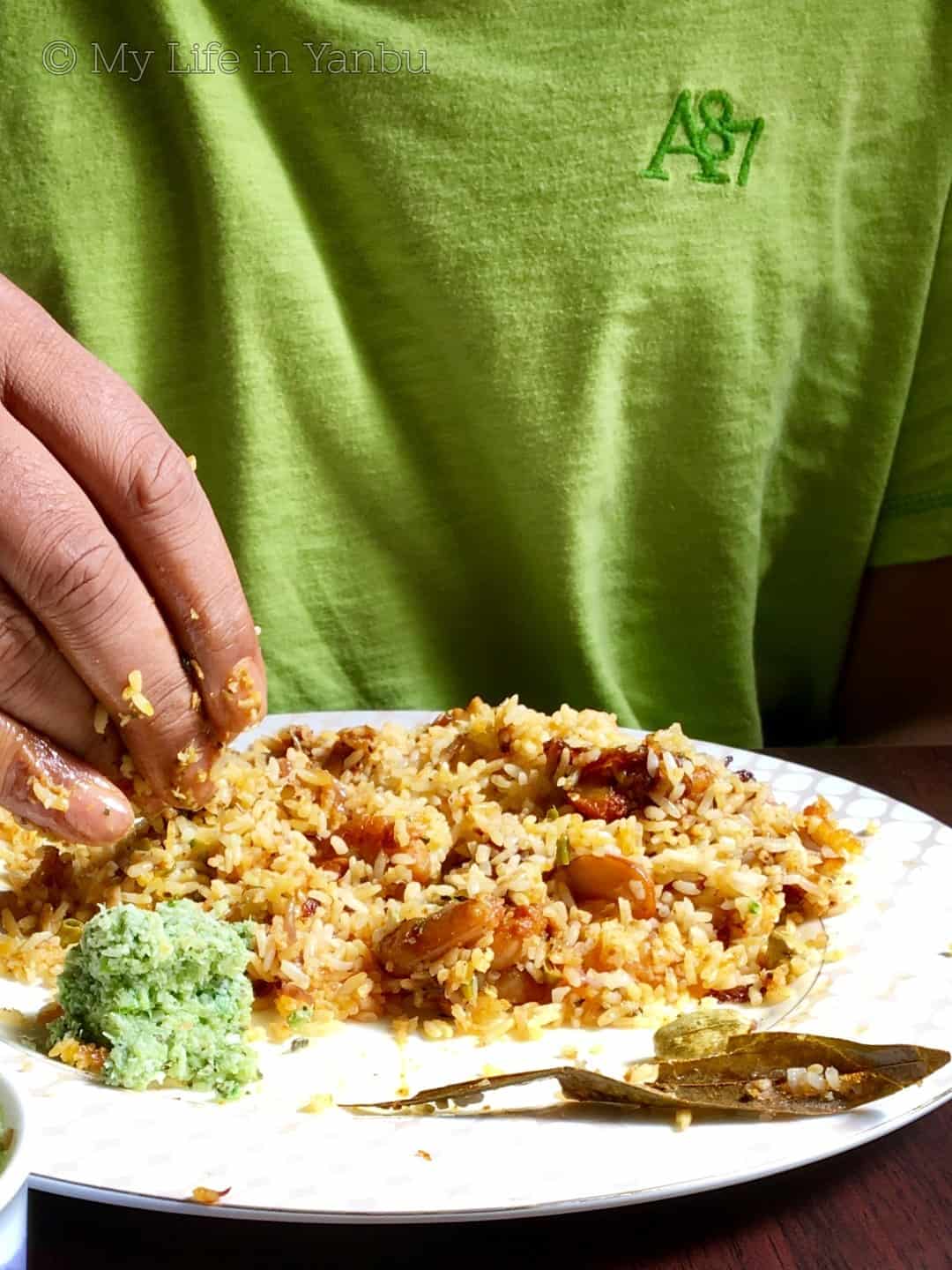 Keeping in mind not to overdo and kill my man's love for only seafood, I have not prepared any other Prawns dish so far. 🙂 - a lame excuse - but I can't stand the smell of raw prawns until it gets cooked completely, and then there is no holding your breath - you want to breathe in the rich aroma that comes out of the pot! YUM!
TRIED THIS RECIPE?
I would love to hear from you. If you have made this recipe then do leave a comment below. If you like this recipe then do share the recipe link on Whatsapp, Facebook, Twitter and Pinterest. Follow me on Instagram and mention @butfirstchaai or tag #butfirstchai so that I can see your creations!