I chose to make my stash with whole spices because I didn't have ground cloves, so I anyways had to use the processor so might as well use all whole spices. But if you have only the ground (powder) version, then go ahead and just measure and mix! I have included the powder measurements based on the conversion guide seen on multiple established websites.

What is baharat made of?

What I learned is that Baharat is Arabic for "spices" so it can be a blend of any spices. The Levant has its Baharat that they call 7 spices, and the gulf has its version which is primarily used for Machboos or Kabsa. My recipe is more of the Gulf version. Think it this way - Baharat is Arab's Garam Masala, therefore if you are an Indian/Pakistani, you know there are plenty of garam masala recipes but a few spices will be part of every blend. Similarly, the Baharat spice blend has a few indispensable items.

Baharat is a warm spice blend that varies by region and household and typically includes black pepper, cumin, cardamom, cloves, allspice, coriander and paprika. Some blends call for nutmeg or dried lime or even dried mint depending on the region.

What can I use instead of Baharat?

You can pretty much use any other middle eastern spice mix like Bezar or Hawaij. It is okay if you do not have some of the spices to make the blend, you may choose to skip them and still have a flavourful dish. If you have ground spices, then you can make a tiny batch just for one dish by mixing already ground spices.

Is Baharat the same as ras el hanout?

No, they are not the same but they do have common ingredients. 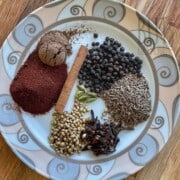