This is a long overdue post and I am determined to work on this before I post any further recipes. I have been working on sorting about 200 pictures taken during the four to five hours of drive to the World Heritage Site in Saudi Arabia - Mada'in Saleh.

1st April 2016 - Like any other Friday, woke up early and just out of the random conversation we decided to go off for a drive. As you all know there is nothing much to do in Yanbu, a long drive with no destination or plan is far better than staying home or visiting the boring malls here. Also, this doesn't happen too often or let me say it is a RARE thing for F to make these spontaneous decisions! 😛 So I HAD to grab the opportunity even if it was a short drive. That was how much I wanted to get out and feel the sun... I used to sulk and feel sad that he is not keen on taking me out early morning drives like earlier... but this day I realized why he chose not to go out for the last few weeks. Sand Storm!

I thought this was just another drive around the city and maybe some grocery shopping. But just before we stepped out, he was switching off and keeping things away like we are gone for days or something.. so on asking him where?? Mada'in Saleh! and that it is a 4 to 5 hours drive. So I just packed some chocolates which are a must for me for any travel. By 8 am we stepped out of the gate which is when I saw, well cannot see anything! Sand storm!

We ignored them and drove ahead. I was getting really scared as I couldn't see anything and feared how he would drive through? But I guess it is his daily thing.. and is used to it but I was in awe! 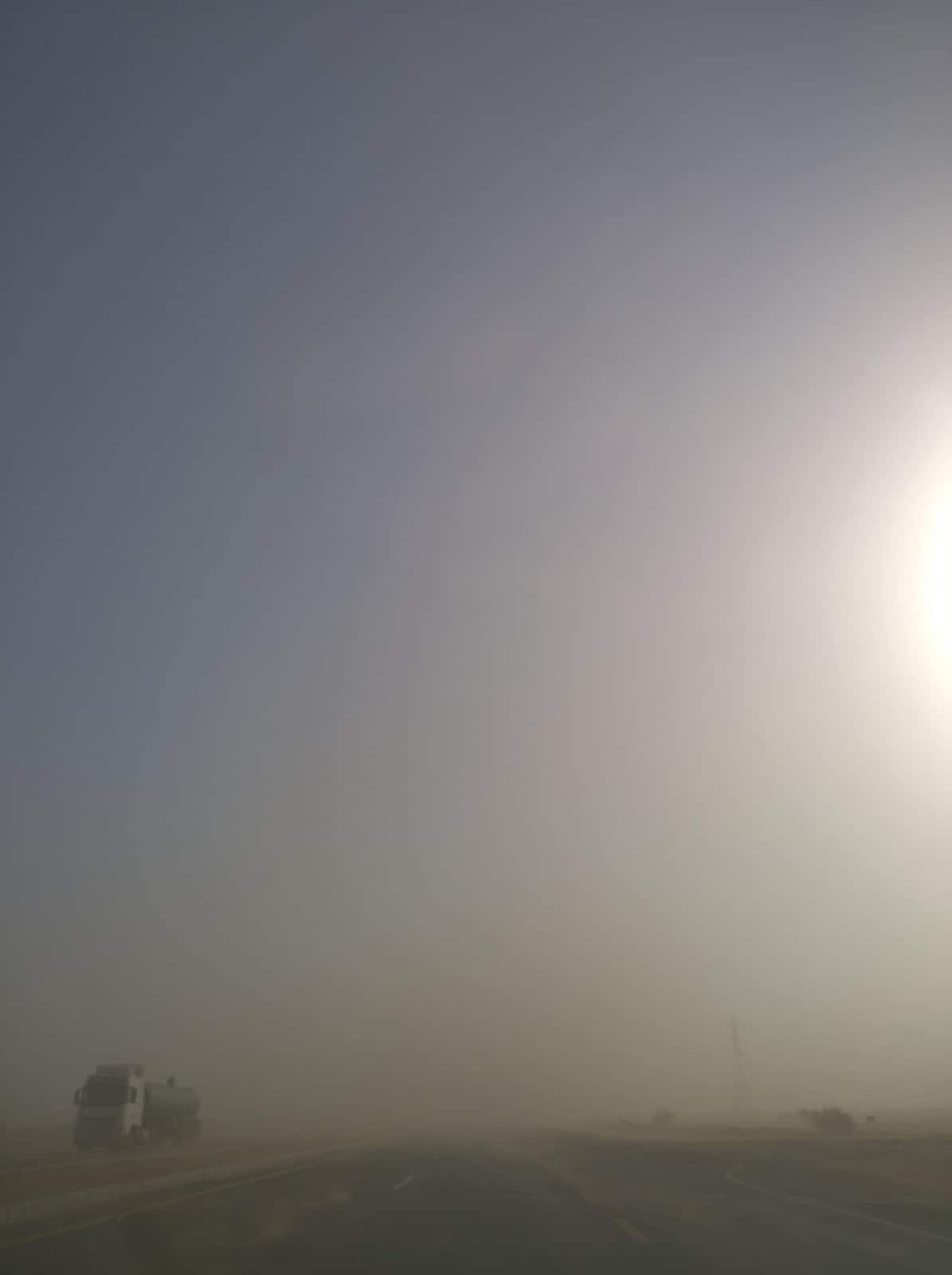 Sitting in the car, I was feeling so handicapped as I had no wifi and no internet. There was no way for me to read about the place we were going to, and nothing to eat, nothing to read, nothing to think about... it took me just a few minutes to forget the world while looking at the vast stretch of empty land throughout the drive.

We hoped to pick something to eat on the way but unfortunately, there was nothing. It was Friday so anyways if there was a restaurant it would be closed. But there weren't any apart from deserted Petrol stations or some small Bakalas (shops). After a few stops, we finally got to an open Petrol station and the shop beside that had some bottled water and chips. So Our breakfast was some Cheetos and potato chips.

That is the route we drove. I have been to Yanbu Al Nakhal before and have shared that experience in my early blogging days. And today it was the same route but further up. I missed every attempt of clicking the name board by a fraction of a second and ended up with all blurred images. I so wanted to share one which stated "Inhabited Area - Go slow". Yeah, that will make sense as we were driving around the hills which had no signs of living - no houses, no animals, nothing - just the long road bending around the stunning hills. 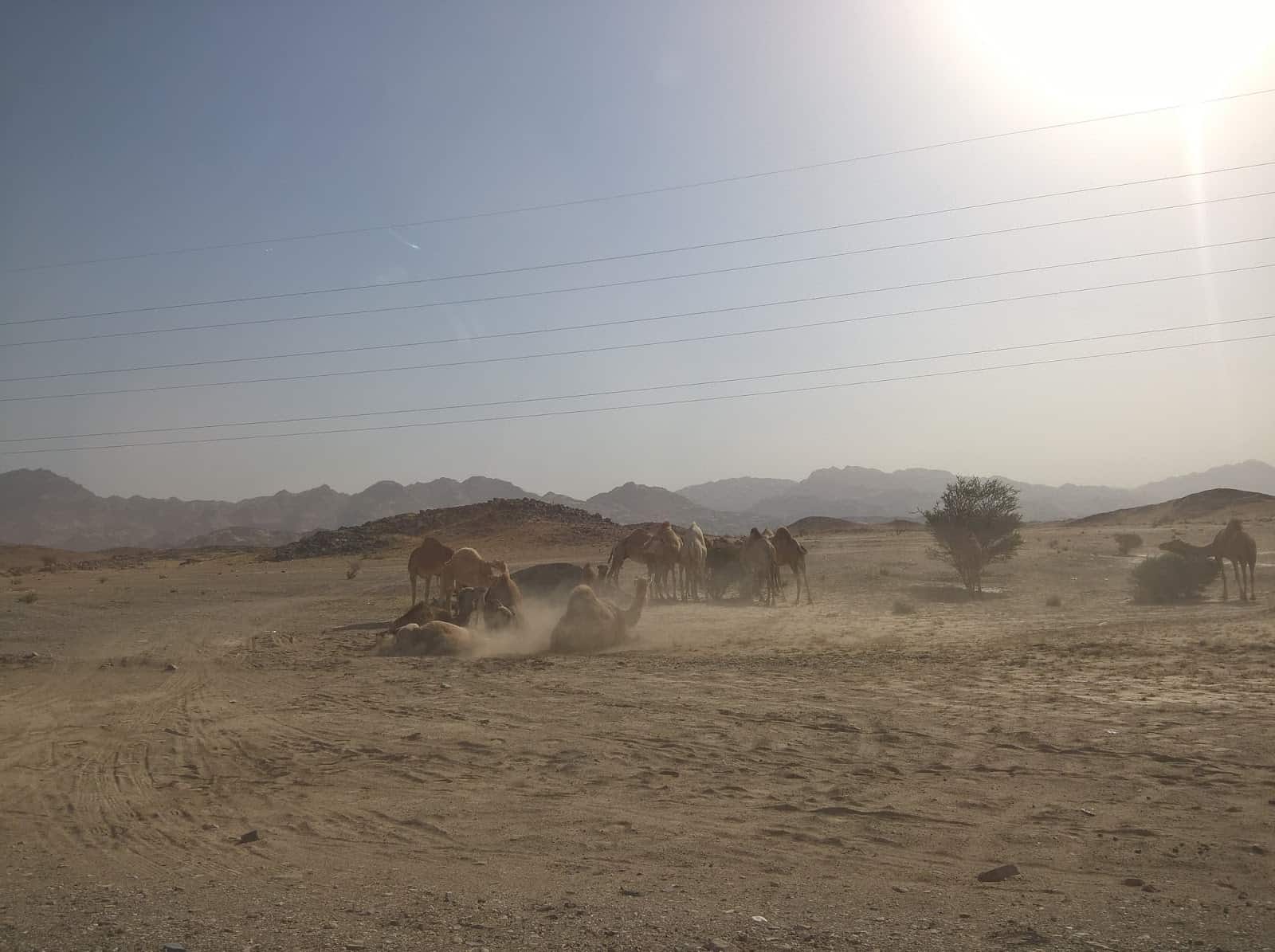 We spotted these camels that were a treat to the eye! F stopped for a  few seconds to help me click this picture. My kind of road trip would have been stopping and being in that moment that will be etched for life. But he was more concerned about reaching the destination as we had to drive back! So click as much as I can to bring back some memories to relive. I am sharing pictures in chronological order so it will help you to see the changes in the scene on the way. This is here for those who want to do something during weekends and for those who want to know what is in Saudi Arabia! 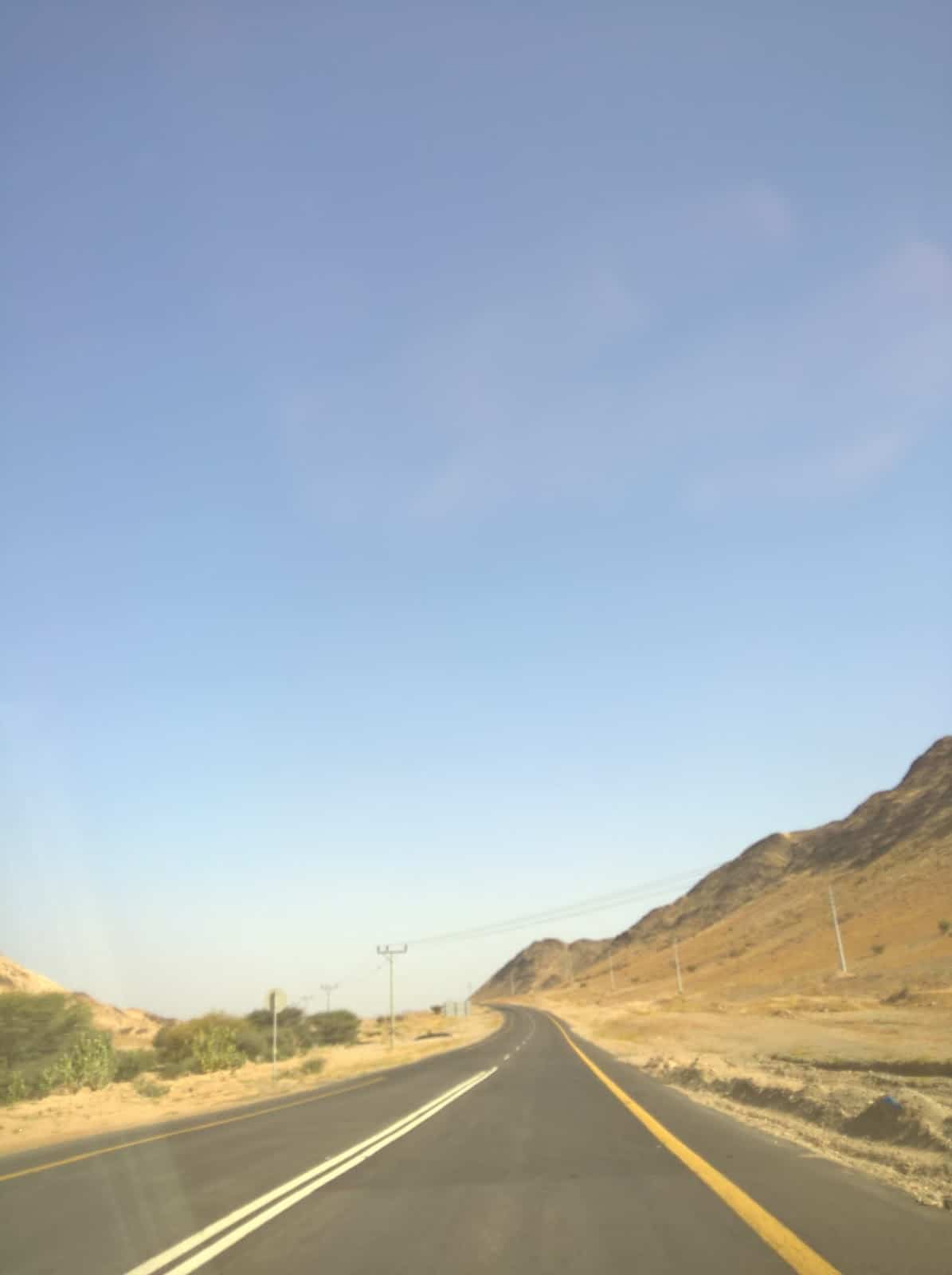 The main reason it took me so long to write up and share the pictures is, the pictures! 😀 As I skimmed through the 200 odd photos I saw that almost all the pictures up to the destination were just roads and hills. But trust me the actual sight is far more stunning than in these. 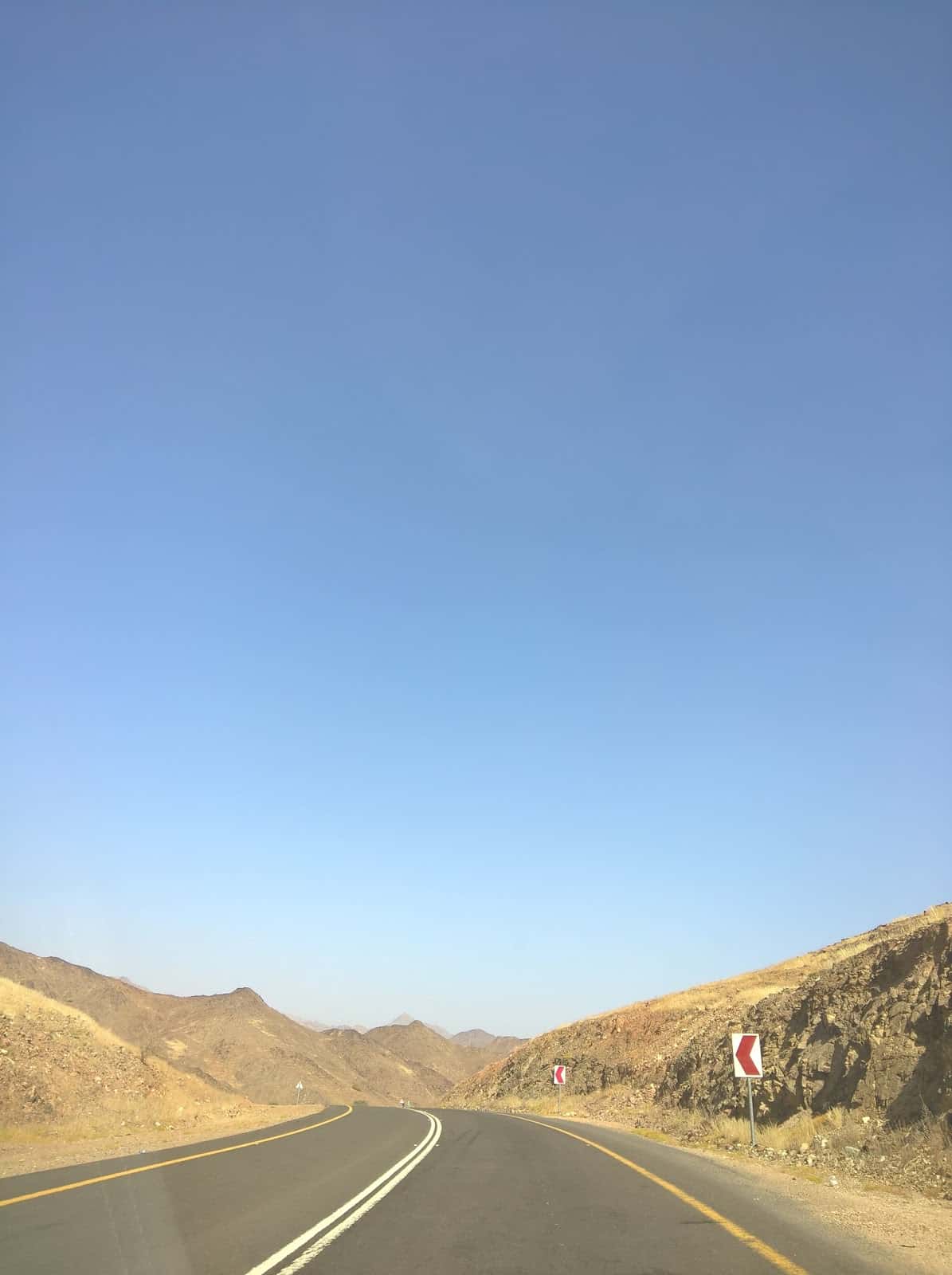 The hills all through the way were of different shades because of the type of rock or stones. Hardly any bush other than these small wild grass that made me wake up from the "bored of hills" thought and quickly clicked the lone trees and plants. How we take for granted what we have with us every day and then miss it only when it is not seen!

All through the drive, there was hardly any company on the road other than a truck or a car. It was the free road I guess because it's Friday but I am sure the traffic is far less here as there were no traffic signals nor the radars and warnings etc. It was like an abandoned path that's less frequented by a few ghost cities. 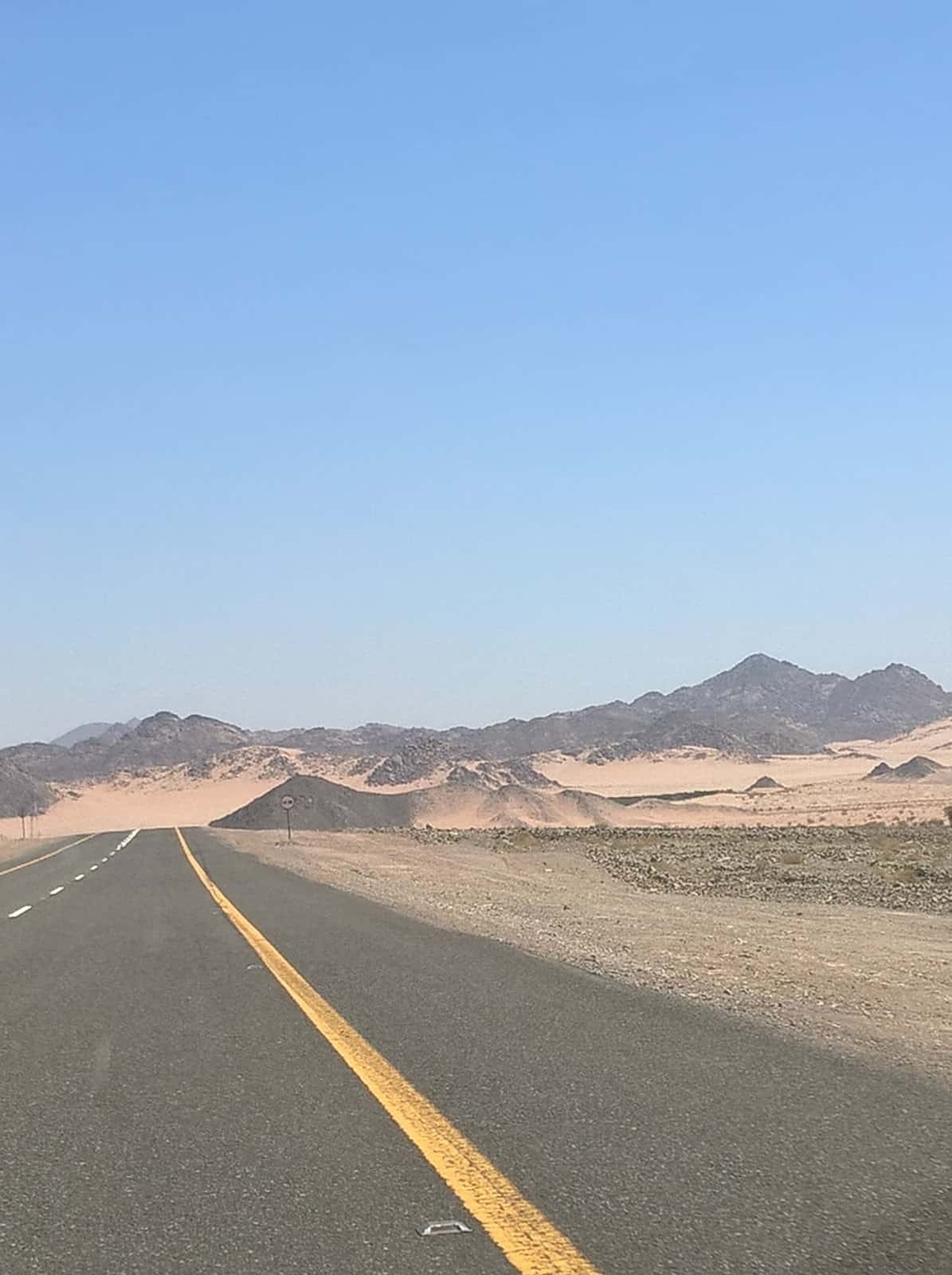 I really thought four hours of drive will be refreshing but with no food inside the car and dried hills outside the car was not helping at all! I was already done with all the chocolates I brought and we were done going through the playlist of favourite songs. I was waiting for a change in the scene. 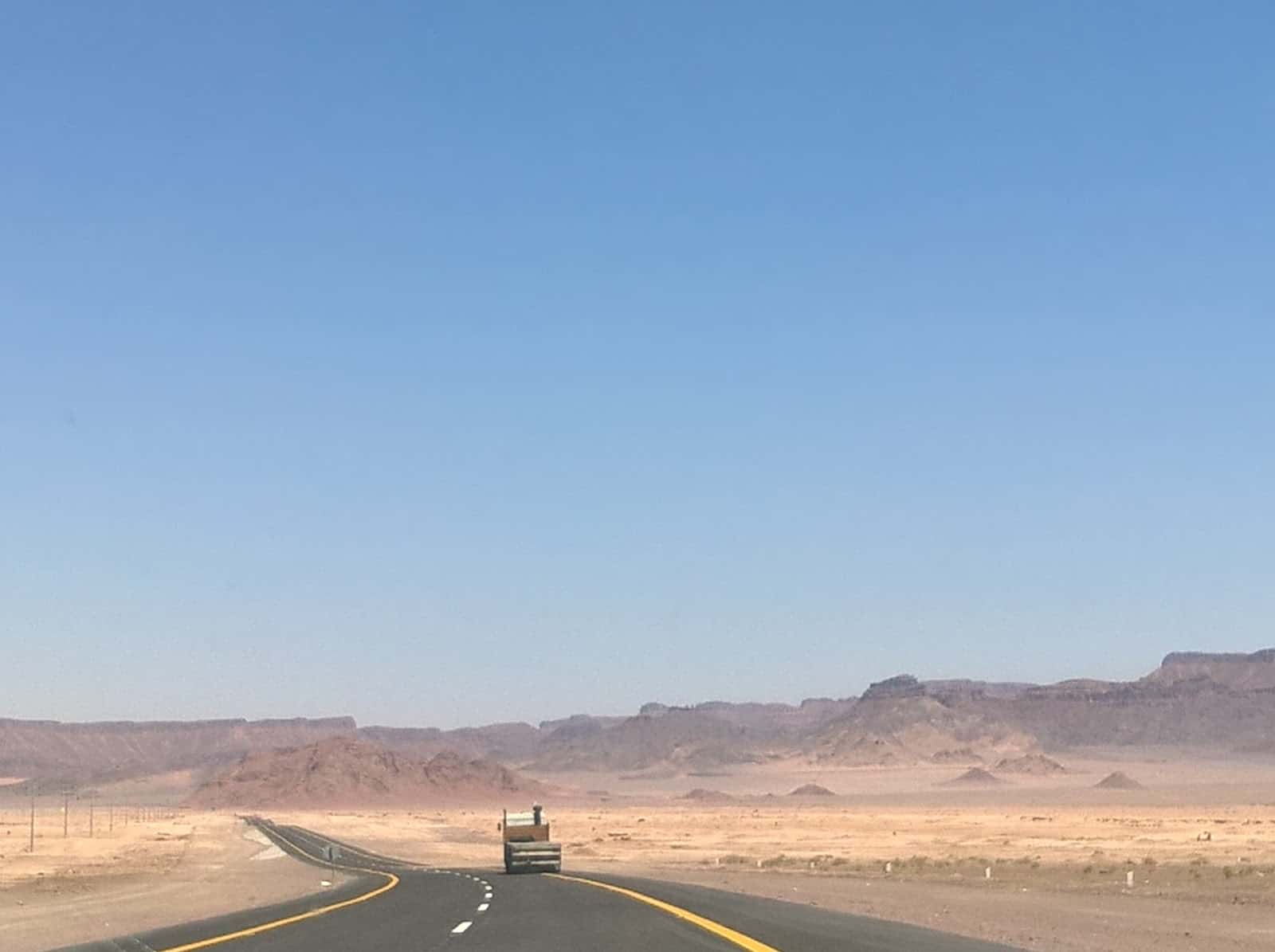 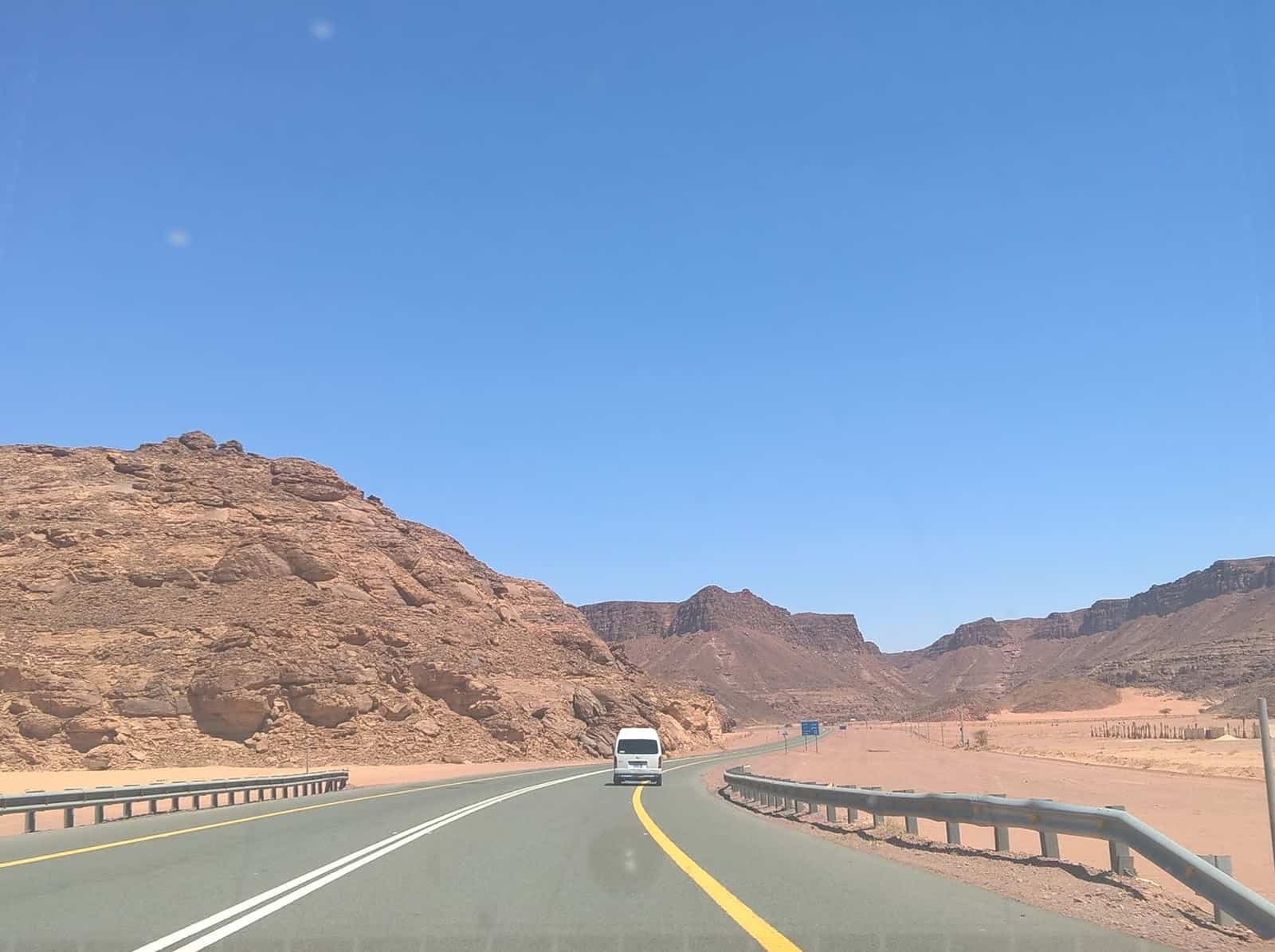 Ah! there it is the Stone Land! The Antiquities of Mada'in Saleh welcomes you! We had used google maps to reach the destination and as we followed the voice it led us to a gate that was locked with a sign stating that the entrance gate is in the north. When I saw the lock and the note in broken English, the first thought that came was "It's Friday so it's going to be closed! how did I not think of that? How can anything be opened and working on a Friday?" But as I had no idea what I would be missing I didn't feel bad at all! Like if I knew it is a historical place that is carved on rocks I would have felt so bad and then waiting for another day to drive again was something I cannot even expect to imagine. 😛

But we just went around and moved ahead to North with the help of GPS and voila, we reached the main gate and looks like it is open to the public. It was lunchtime and still, the staff was helpful. 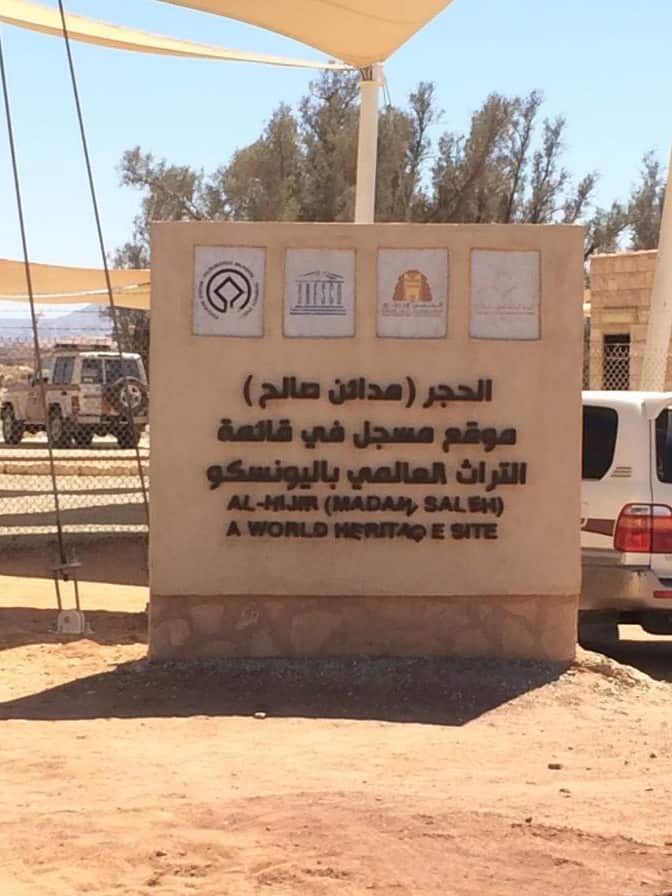 Entry is free. Parking is free (duh!). No food so no litter. You will be given a water bottle and I was super glad that the place was so neat and litter-free. No personal tourist guides or any such thing that you find in India. You are on your own with the guided instructions on signboards etc. As you enter you will find some buildings on the right side that resemble the British-style architecture and they are the VIP rooms, research centres etc. Then there is the Hijaz Railway Museum with the replica of the stations. There is also a theatre room which runs a short documentary on this historical site which was in Arabic. Just beside this building is another huge place that houses the actual Hijaz train which was used in the early 19th century and apparently destroyed during the world wars. Per history, Hijaz Railways was built to transport pilgrims from the city of Damascus in Syria to the city of Madina in Saudi Arabia. What started with good intentions was destroyed during the first world war. 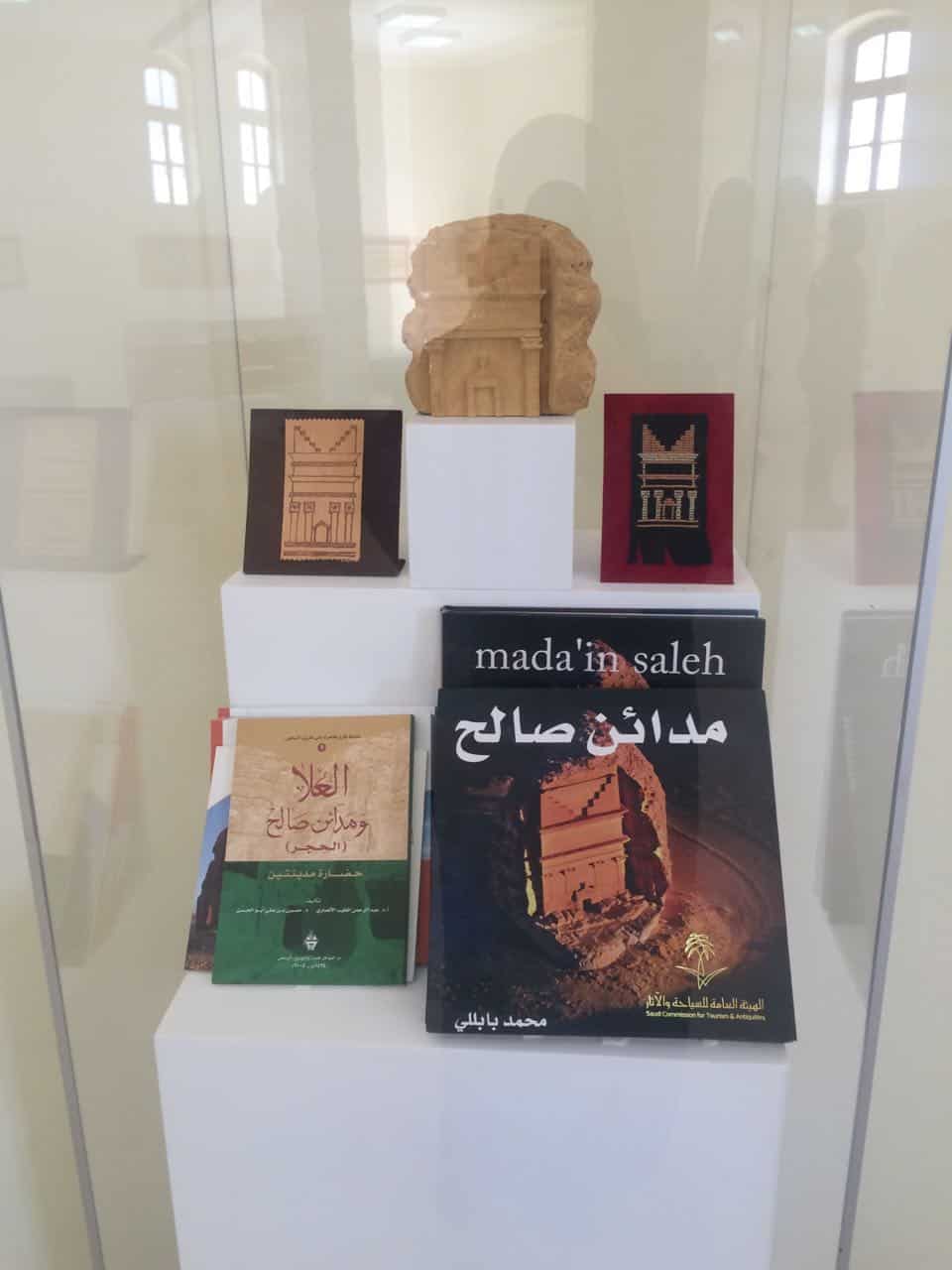 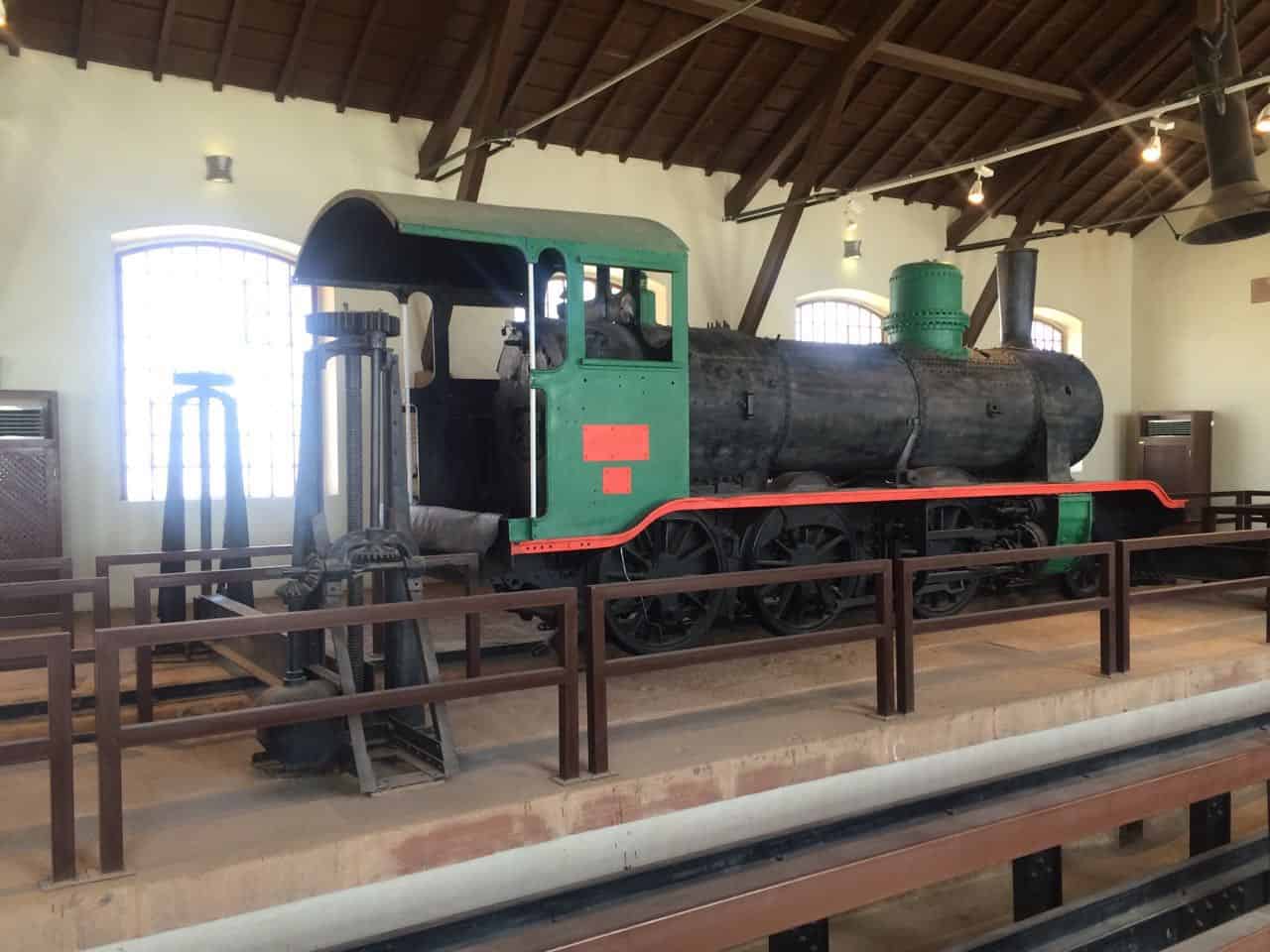 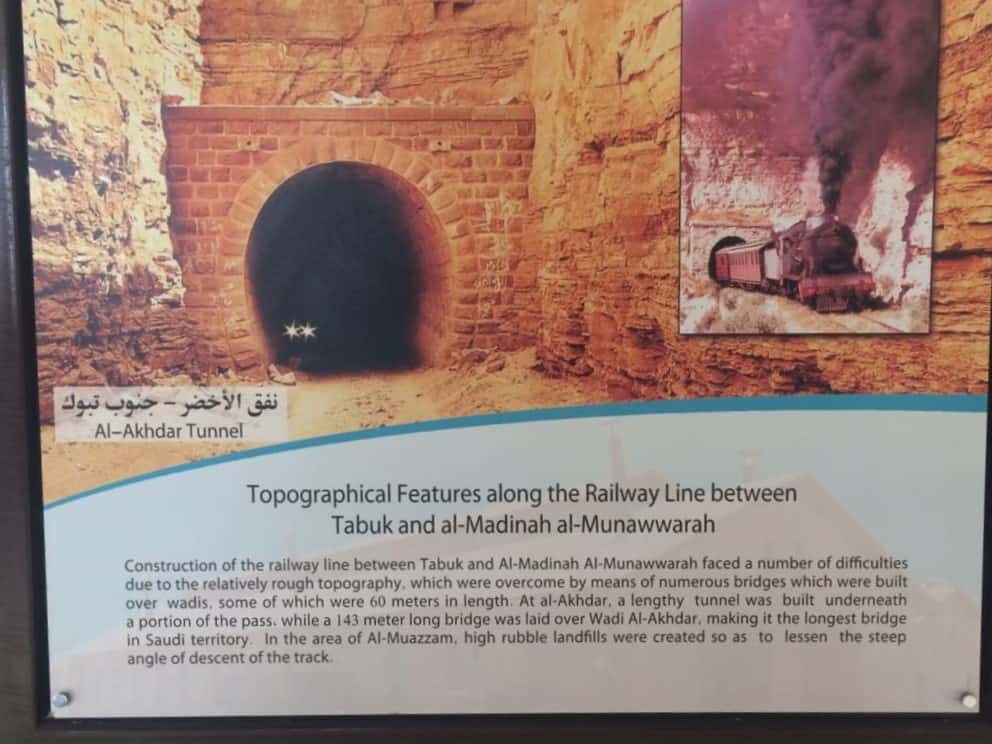 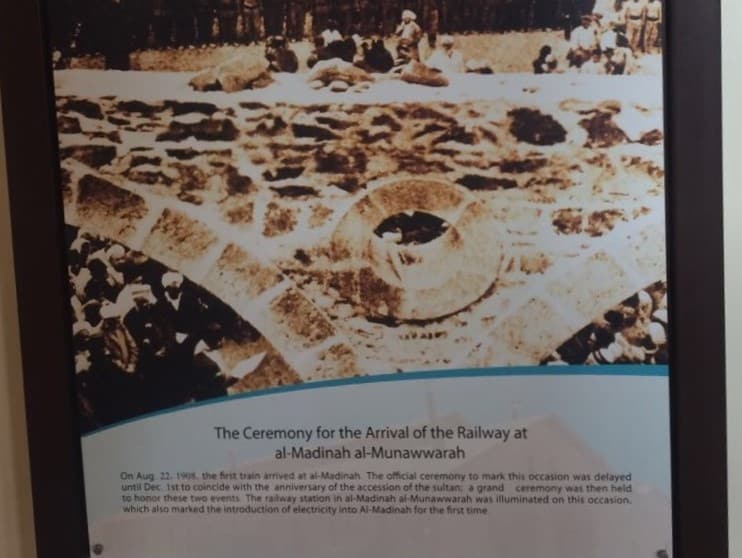 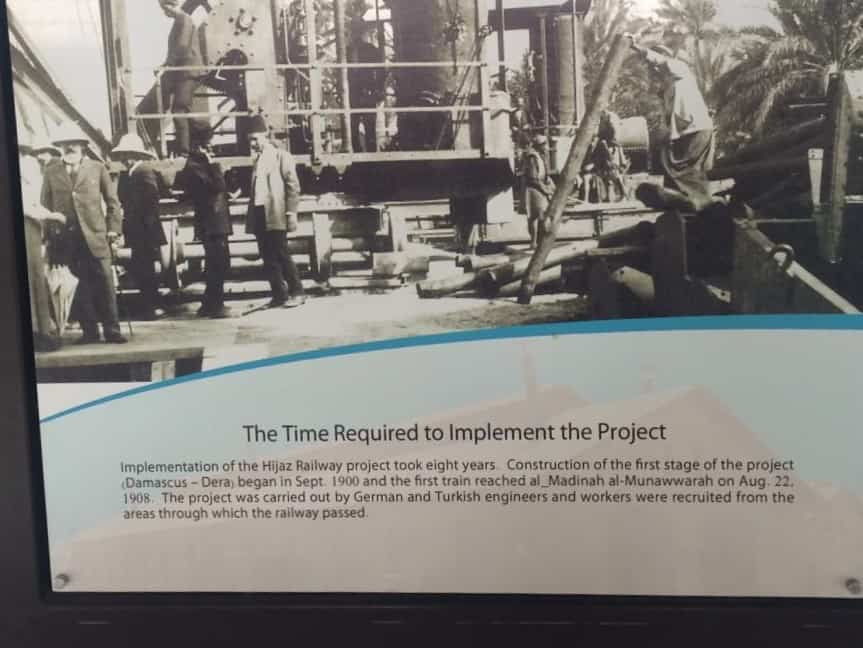 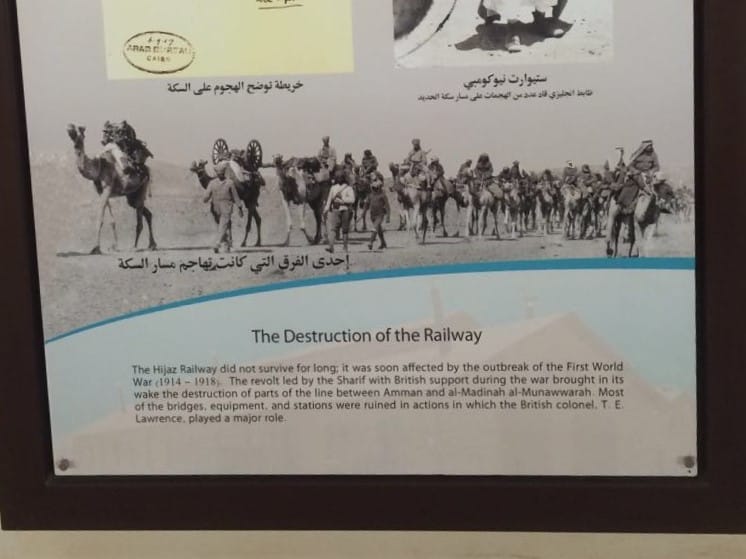 There is no hard and fast rule on where or what you need to see first. I would have preferred to watch the documentary but I do not understand the language. The Railway museum did not need any help as it has English descriptions too.

Inside the train, they have a mini-museum with little things that were used while it was running full-fledged. 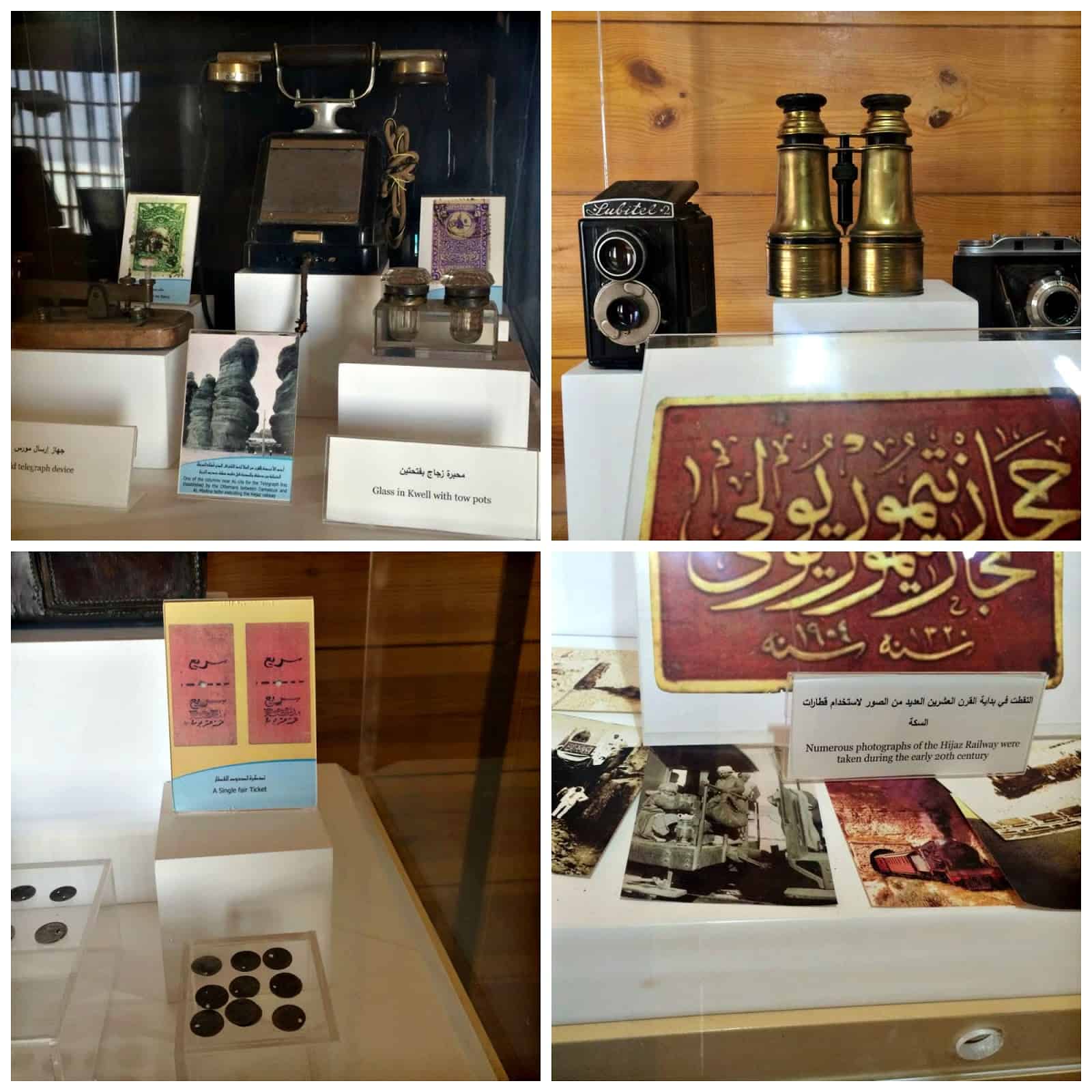 Did you realize, India thrives on railways and here it is in a museum! 😛 Anyway, I am sure the metro kinds will make it soon in Saudi.

Once you're done with this part of the site, you can take the car and drive to the Tombs of Nabateans.. but before that, if you want to use the washroom do it now as once you head to the historical site there is no way but to drive back here.. 😛 To be continued.


I am tired of typing all this. This topic and I have had our share of battle. Can you imagine I spent 5 or FIVE  hours doing this post? not only did I have to sort 200 odd pictures to a selected best ones that cover the entire trip but also I grouped some images into a collage, watermarked them for the first time, uploaded all and when the preview showed up images ---- they were all minuscule - Dang. 🙁 No idea what happened but I am hell-bent on posting this today at least a half of it..  so back to square one! I have put up raw images but the best ones show the different shades of the hills and landscapes. Hope this gives you some insight into the route to Mada'in Saleh.

I need some stress eating.