Feteer Meshaltet recipe for two bread that I stuffed with a sweet mixture of almonds and pine nuts.

MENA Cooking Club is back after a month's break and what a great way to start 2017 with a dish from the land of Pyramids - Egypt. Like every time we were given three options and we could make one or all three dishes.

A little about Egyptian cuisine will just add some charm to this post! So, from what I read, Egyptian cuisine largely includes vegetables and fruits which form a base for most of their meat dishes too.

Kushari, the national dish of Egypt which is a mixture of rice, lentil, and macaroni is on must-try. The local popular bread Eish Masri is a thicker form of the pita made using corn. It is used as a utensil to scoop up dishes such as Fool medames, a popular dip made with mashed fava beans. While I am yet to make all those dishes, I do have the recipe for Baba Ganoush and Molokhia Chicken Stew which are also a big part of Egyptian cuisine.

Being a popular tourist destination, their desserts have also travelled worldwide, so little needs to be told about Egyptian sweets! Must have heard Umm Ali and Basbousa! 😛

Feteer or Feteer Meshaltet translates to "a cushion-like pie" made of thin dough with liberal quantities of ghee or butter with or without stuffing. As the stuffing can be sweet or savoury, there is no end to possibilities. The plain feteer is usually served with a selection of icing sugar, cream, molasses, honey or tahini along with some tea.

Now, have I had Feteer? Yes! The week before I read the challenge, I picked one feteer from the bakery after our grocery shopping. But I was not too happy because it was so greasy and bland. It was not fresh and it was a packed one which may be the reason I quite did not favour it. And top it all, I had no idea it had to be had with some cream or jam. Yet, I chose to make this because the internet versions looked more promising! 🙂

I realised that Feteer meshaltet ingredients is almost the same across the recipes but the method of making the bread differed in a few aspects.

You have to choose the method that is your kitchen friendly. Read more to avoid the mistakes I made...

My first attempt was a major flop. I went wrong in gauging the dough ball size for my workspace. I did not realise it could stretch so much so there was a lack of space causing it to have thicker edges and then clumsily folded. You cannot gather back a stretched dough! It was too late to take a step back so I went with the flow. I then chose to cook it in my cast iron pan which was not a bad idea. Yet, I was not happy with the outcome of the taste or the looks of it. It went into the trash the next day 🙁

The second time I learnt from my mistakes and made smaller dough balls and refrigerated the parcel before baking.

As Feteer is listed as dessert for the challenge, I chose to make it extra sweet! This one was a super-duper hit and my whole house was filled with the delicious aroma of almond, pine and all that ghee-filled layers... yum! that gave me a mouth-watering moment. 😛

I have not given the exact measurement of oil as I used it straight from the bottle. But to be honest I have not been as liberal as is shown in all those videos. Makes two 6-inch feteer. The images are showcasing only one Feteer cut into pieces.

spread the well rested dough on a greased surface. Stuff and parcel with nut mix.

Place one parcel inside another dough spread. Repeat at least three times to make one feteer. 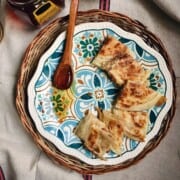 For the Almond Pine Nut Mixture

Divide and rest the dough