Chicken korma with yoghurt is a popular Indian curry flavoured with whole spices, fried onions and simmered in a spiced yoghurt sauce.

I learned to make this one-pot Chicken Korma with yoghurt from my friend, Aysha while in Yanbu, Saudi Arabia. It amazes me how I favour other cuisines over mine and am unapologetic about it. While they devour our sambar and dosas, we drown in their tandoors and naans, isn't it? Food brings people together and our nation is a beautiful example of it. But I hope I am forgiven for making this Chicken Korma simple and easy for our everyday meal. 😛

I watched Aysha, my Urdu-speaking friend from Meerut make this lip-smacking chicken korma for our girls-only night. It definelty seemed like a labour of love because she made each step with so much love and care. She served with Tandoori roti which came from a Pakistani restaurant in the city. It was a killer combo! I was salivating and still do whenever I recreate it in my kitchen. A dish that has pleasant memories of Yanbu life.

While she made it the traditional way of making crispy fried onions first and keeping them aside for adding at the end, I chose to make it all in one pot. Saves time, energy and dishwashing!

You should try this recipe because....

How to make chicken korma?

Making this chicken korma recipe in one pot is super easy! Check the recipe card for a detailed recipe and print version.

Can we cook yoghurt?

I had shared this chicken korma with yoghurt recipe on Instagram stories and many of you tried and loved it. But some were uncomfortable with the thought of cooking the yoghurt for that long time. I understand because I had the same doubts. We South Indians are used to making yoghurt-based gravies like moru curry, thyir curry, etc. where we don't let the yoghurt boil and split. That doesn't mean cooking yoghurt is the wrong thing to do...those recipes don't call for it but most of the North Indian kormas rely on cooking the whisked yoghurt with the meat and trust me it is not unhealthy.

If you love mint and coriander, then you should try my Hariyali Murgh Korma recipe. 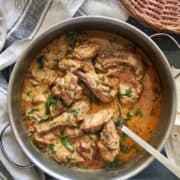 A post shared by Famidha Ashraf. but first chai (@butfirstchaai)