A Dutch Baby recipe makes a large oven-baked puffy pancake that is super easy to make and delicious to eat. I love to add sliced apples and cinnamon sugar and serve with sweetened labneh and berries. So good you will almost feel guilty eating it for breakfast!

After a period of perfect pancake breakfasts, I was looking for an option where I can just make one large pancake that can save me time and dishes. Enter, Dutch baby!

I have been making us some Dutch babies with apples a few times now. Inspired and adapted from Martha Stewart's recipe. So, I thought why not share so you too can let the oven do the job while you put on some makeup and paint your lips?

Here is the list of ingredients you will need to make the german pancake. Please go to the recipe card for quantity and details of cream and garnish options.

How to make it?

Use a blender to make the batter

Start with eggs and a little milk so that the eggs blend smoothly. Add the remaining milk, and the rest of the items that include flour, sugar, salt, zest and vanilla extract and blend to a smooth batter. The batter will be thin but needs to be rested for a while before you can use it.

Preheat the oven with the skillet

Place a 9-inch cast-iron skillet or any ovenproof skillet in the middle rack of the oven and preheat it to 200℃ for at least 20 minutes. Take this time to prepare the toppings.

For this recipe, slice apples and make a small batch of cinnamon sugar and sweetened labneh or Greek yoghurt with honey or maple syrup.

By now your oven will be ready - use gloves and take out the pan and add the butter. Swirl the pan so that butter is coated all over the sides of the pan. This is important so that the pancake can rise and come off the pan without sticking.

Pour the batter into the hot pan.

and nestle the sliced apples all over.

Bake for 20 to 25 minutes until fluffy. Don't open the oven door until past 22 mins.

Remove from the oven and you may brush with some more butter and lemon juice or sprinkle icing sugar or more cinnamon sugar. I take the skillet to the dining table and serve from it. You may use a spatula and transfer the Dutch baby to a serving platter and top it with berries etc. Serve with the prepared sweetened labneh and berries.

HINT: Once out of the oven, the Dutch baby will quickly collapse losing the puff. But no worries, because what’s left behind is a pancake with the soft, tender texture of a crepe and the eggy flavour custard.

Slice it into wedges and smear each slice with some yoghurt and syrup as you serve it up. There are so many ways to top your Dutch baby, but today I’m sharing our favourite and convenient way — with plenty of apples, a sprinkle of cinnamon sugar or powdered sugar. Top your slice with some luscious labneh sweetened with honey. Heaven. You can easily use Greek yoghurt or hung curd will work too.

You can make a dutch baby recipe without the apples! Just skip the apples and continue with the baking. I have included measurement options that you can experiment with to find your favourite texture.

What is a Dutch Baby pancake?

Dutch baby pancake is a famous American popover that is baked in the oven. A thin smooth batter is poured on an already hot buttered ovenproof skillet and baked in a hot oven. The batter will rise and puff around the edges like a pillow.

Why do they call them Dutch babies?

Did you know Dutch baby is not a Dutch dish? The Netherlands has their version of pancake called Pannenkoeken. A bit of reading showed that dutch baby pancake is actually of German origin and are sometimes called Bismark or Hootenanny. Dutch baby pancakes were first served in the United States in the early 1900s at Manca’s, a restaurant in Seattle. So, it is safe to say that the Dutch baby pancake originated in Seattle. It is said that the owner’s daughter coined the name, “Dutch Baby" as the result of the Americanization of Deutsch into Dutch - which would originally mean - a german creation.

What are Dutch babies made of?

The batter for a Dutch baby is prepared with just milk, eggs and flour, unlike the American pancakes that are leavened with baking powder.

Are German pancakes and Dutch babies the same?

Essentially, yes. Dutch baby was coined by German restaurant in Seattle and in this context, "dutch" is the Americanized word for "Deutsch". 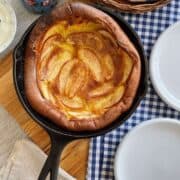 For the cinnamon sugar (mix these)

For the sweetened labneh (mix these)