I am back with another Moroccan Batbout recipe which I read is very popular during Ramadan. This time it is a mini Batbout which I like to call skillet buns as it is prepared on the stovetop and can be filled with anything you like. Before getting on to the recipe details let me share an interesting event. 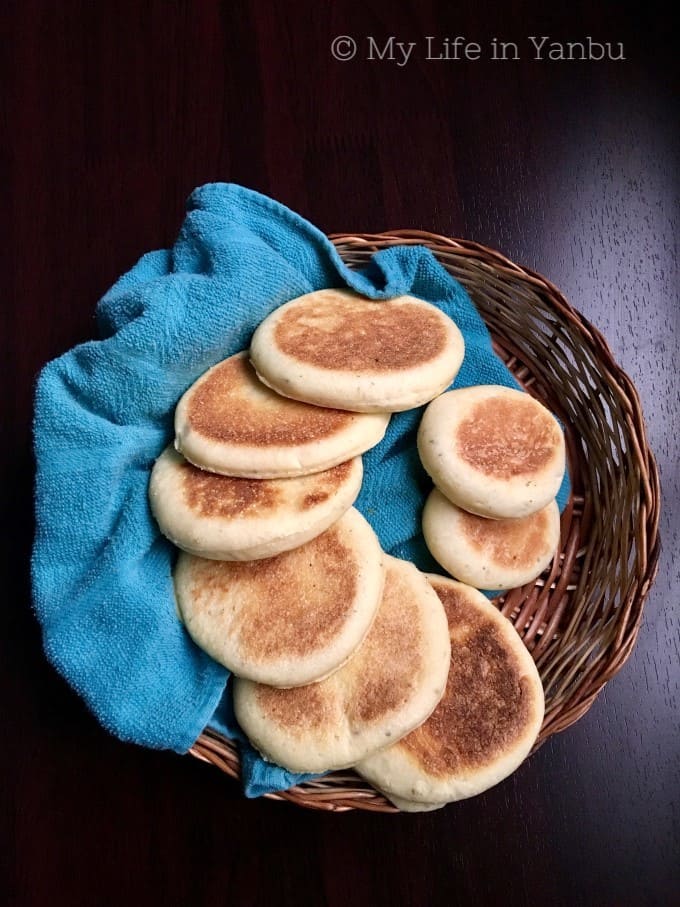 Last Tuesday is a day to remember in my life here in Yanbu. For the first time, I stepped out of the building ALONE and walked to a friend's home who I had introduced some time ago. With more people moving here and newer buildings coming up, it seems to be safer to step out alone. I also learnt that some ladies do take the march to meet fellow species during the day. So all I had to do was muster the courage.

Unlike other big cities in Saudi Arabia, hiring a taxi while alone here is still unheard of. But lately, I got to know that taxi services are growing here and ladies do opt for it. So maybe next time I can go out with her for some girl time shopping. 😉 InshaAllah.
Stepping out was easy but hearing Ragee meow from behind the closed doors made a knot in my stomach. Even though she is used to being left alone when we go to the supermarket, I strongly believe she has the sense to understand this was not a norm. But I had to leave promising to be back soon. The walkout of the building and onto the road was so liberating in a way that made me wonder why I took so long to do this. I spent half a day with her reminding her every hour that my Ragee is alone. Being a cat owner most of her life, she assured me Ragee will be fine. Still...
She served a sumptuous breakfast that included a Tuna sandwich and Chicken Walnut Pom salad, and lots of black tea and chattering! Later in the afternoon we walked back to my home and spent the rest of the evening until her hubby came to pick her up. I couldn't be happier to find out that Ragee became friendly with both her and her two-year-old son. It was a heartwarming moment to watch Ragee fall asleep while watching us babbling and laughing and sipping chai. Alhamdulillah. 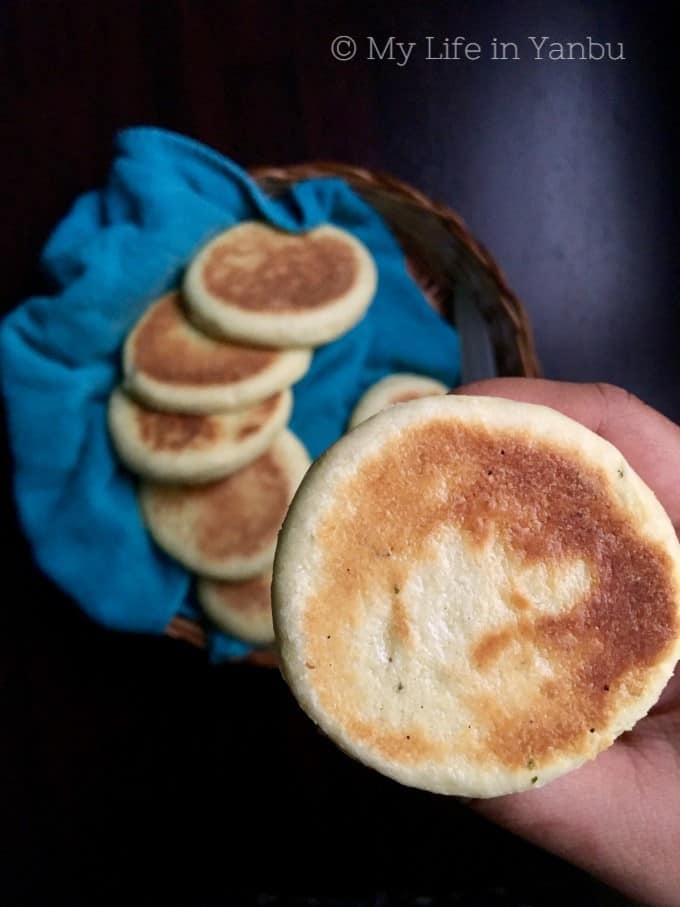 Okay, so back to today's recipe. The first time I attempted making Batbout was because I had run out of bread and it was a Friday. I picked a recipe off the internet and had no time to save links etc. I was thrilled to see buns being made in my nonstick pan with not much enotort and the whole house smelled like a bakery. I filled those Batbouts with Sawsan's Shish Tawook.
The third time I made Batbouts for the Peruvian Grilled Chicken from Shazia's blog. Honestly, I made Batbout for the blog and thought a grilled chicken picture would be great for my blog. 😛 Alas, we felt that the Peruvian grilled chicken was finger-licking good on its own and Batbout was not required at all. 😋 So we used them to stack burgers with my stock of beef burger patties and labneh on the same night. So no picture was taken. 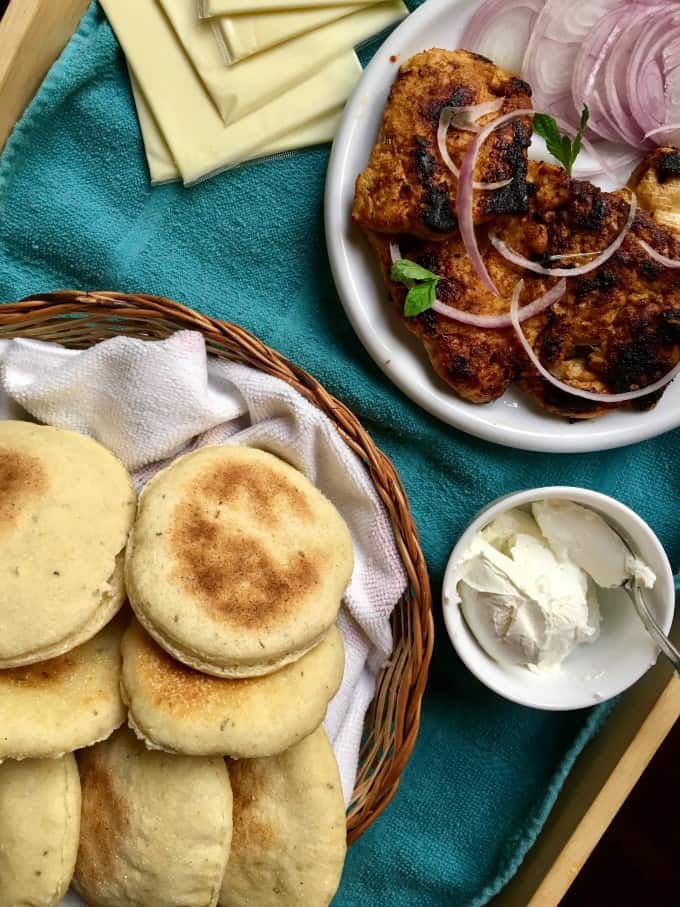 I used one Batbout recipe altering the liquid from water to milk and I have to mention both were good but I prefer the milk version better. Just like Msemen and Meloui, even these Moroccan Batbouts do not have one fixed recipe. I have noticed many using equal volume or semolina and flour, some using only flour and very little semolina etc. So play around until you get your favourite way but this is my version. 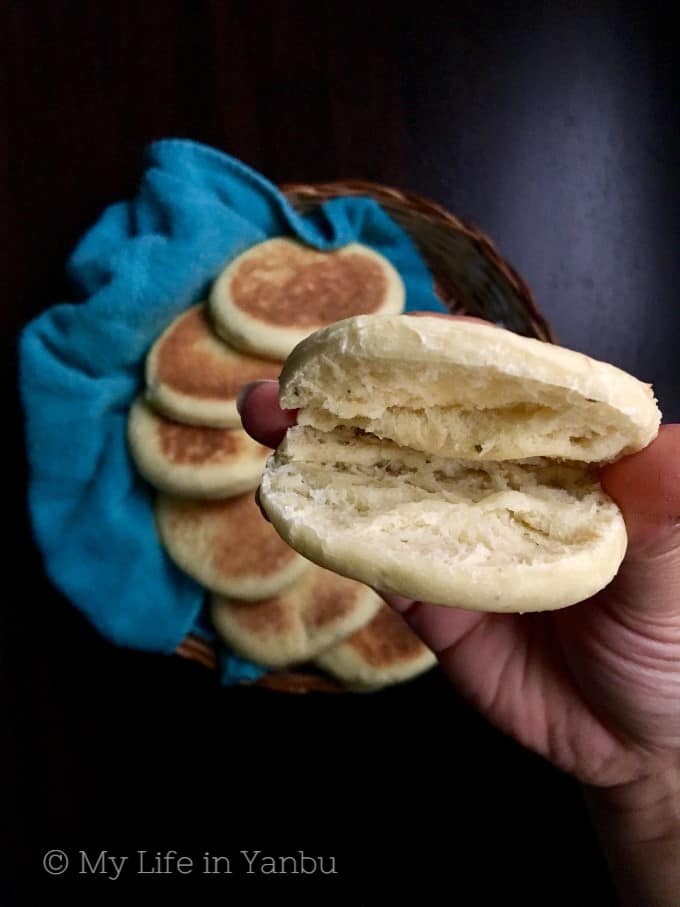 (with milk)I have tried replacing ½ cup of all-purpose flour with ½ cup of whole wheat flour or atta. There is a huge difference in the texture and body so I stick to Patent Flour.

more semolina to dust the surface*The addition of milk instead of water resulted in sturdier buns while with water the Batbout had a softer body Traditionally, water is added. 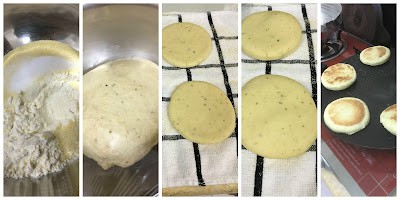 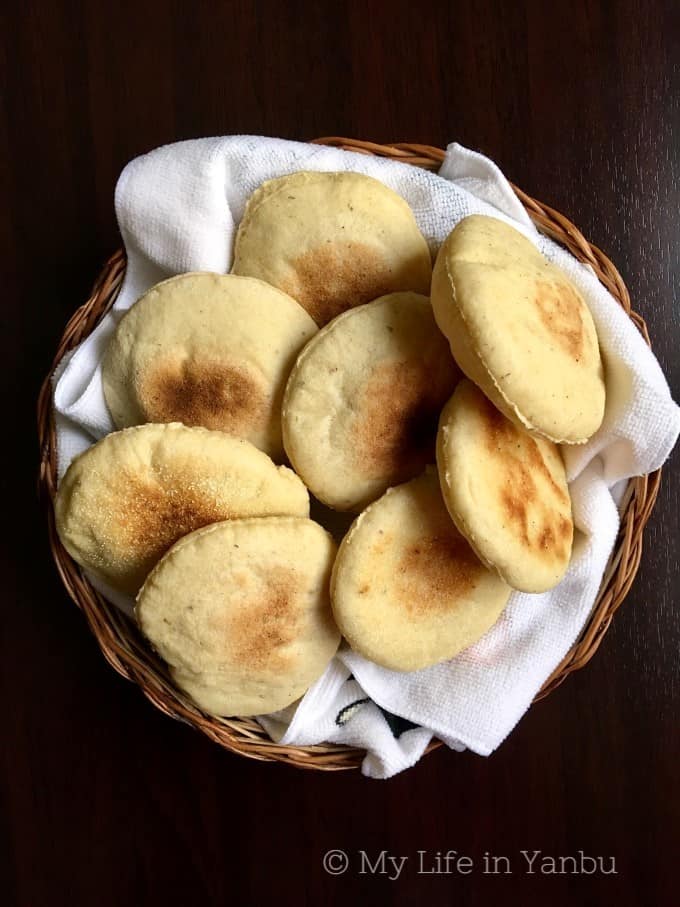 (with a portion of wheat flour)

I like this Moroccan blogger's article about Batbouts that I came across when drafting this post.
The Mini Batbouts are left to rise longer because we want a thicker bread that can hold the stuffing. You can make a thinner version and I already have a thinner Batbout recipe that is used to scoop up curries. These Batbouts can be made in any shape and size and freezes well too.I can't wait for Ramadan to start! 😇because as usual, I have not made any prep. 😁
TRIED THIS RECIPE?
I would love to hear from you. If you have made this recipe then do leave a comment below. If you like this recipe then do share the recipe link on Whatsapp, Facebook, Twitter and Pinterest. Follow me on Instagram and mention @fashfaiz or tag #fashfaiz so that I can see your creations!