Kabuli palaw or Qabili Palau consists of steamed rice cooked in a flavour-packed meat broth and topped with meat, fried almonds and caramelized carrots and raisins.

As part of my GlobeCookingMad series, I am sharing my humble attempt at the Central Asian country, Afghanistan's national dish, Qabili Palau.

Afghanistan, I think most of us are aware of this country mostly for the wrong reasons. However, let us focus on their cuisine, shall we? Afghan cuisine is largely influenced by Persian, Indian and Mediterranean cultures. I was surprised that they too have naans, chapatis, and all types of pulao or palaw as they call it. They have bolanis that are similar to our stuffed parathas. Their national dish is Kabuli Palau and it is known by different names like Kabuli, Kabul, Qabul, and Qabili Palaw.

Are you curious why it is named both Kabuli and Qabili? Humaira Ghilzai shares the reason in her article!

What is the history of Kabuli Pulao?

Kabuli Palau was initially consumed by the upper-class Kabul families as they could afford the ingredients. Over time as the people of Afghanistan became wealthier, this dish became more common. So, the name Qabili Palau was coined. The Dari word Qabil - means well accomplished, indicating that only a skilled chef can truly balance the various flavours of this dish. Qabil is also Urdu and Hindi for "capable", and that is the reason I chose to call this Qabili Palau first. I also read that in some regions of Pakistan they make Qabili Palau but the recipe has garam masala along with the rest of the ingredients and is prepared the same way.

One of my aim in cooking is to reduce dishes as I don't have a dishwasher. You may cook in multiple pans simultaneously to save time or use just two pots as I did.

I started in my pressure cooker with oil:

I have to warn you, that you will end up having a delightful afternoon siesta after enjoying a plate of Qabili Palau. We did. Thank God it was a weekend!

End the meal with a delicious Dried Fig and Rice Pudding!

Next country on my list to cook is Albania! 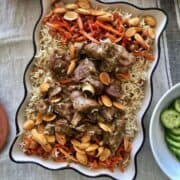 For Almonds, Carrots and Raisins Toppings

To Par-boil the Rice

Prepare the Almonds, Carrots and Raisins

How to Serve Qabili Palau